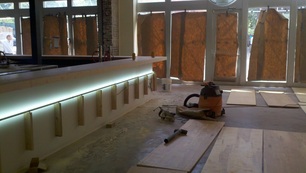 A stylish new restaurant and bar will open its doors November 1st. The owner promises it will be different from any restaurant that's ever operated in Cooper-Young before.

"Alchemy will be a high-end cocktail bar that will serve small plates," said Ben McLean, owner of Alchemy restaurant. "Even the look of it will be different -- it will have a New York look and feel to this place."

In addition to the look of the restaurant, Alchemy's drinks also will offer New York flare. The establishment's bartenders are learning the ropes from trainers in New York to make drinks not offered in Memphis.

"On the cocktail side, we will push the envelope to be quite honest," McLean said. "We will make our own elixers, our own syrups, juices, tonic and really try to be cutting edge."

The layout of the restaurant -  large - especially by Cooper-Young standards. It will seat anywhere from 225-250 people.  Most importantly, McLean says Alchemy will be part of the neighborhood for a long time.

That's an important issue to the community.  The very site where Alchemy now stands has been in flux for the past several years.  It was on this site, less than two years ago, that posh new restaurant 'Grace' opened its doors.  That restaurant closed in one year.

Before closing Grace the restaurant's owner and chef, Ben Vaughn, had opened another restaurant next door - Au Fond.  This new restaurant became such a beloved breakfast and lunch staple in the neighborhood, that Vaughn decided to devote his energy to Au Fond.  Vaughn later turned the former Grace location into El Diablo, a Mexican Taqueria. El Diablo, though, would be open for less than a month. Days after the closure of El Diablo, Au Fond abruptly shut its doors.

Alchemy now sits on the sites of both the former Au Fond and Diablo. Despite the location's notorious track record, McLean says his restaurant is here to stay.  One strategy will be to attract clientele from all over the Memphis area, not just Midtown.


Take a look at some of the plans owners have for Alchemy in this video: