The first Thursday of every month is Night Out in Cooper-Young. That means restaurants and stores have special prices and offerings, and bands are playing everywhere.

The night gives artists, especially new ones, the chance to play and promote themselves and on Oct. 4, new artist Tori Tollison played for the first time in Cooper-Young at the gazebo.

“I live in Mississippi, but in Memphis I live," Tollison said while unpacking her equipment. "I love Cooper-Young. I don’t know about the Night Out, but I'll try to find out. I am exited. It’s cool!”


For three hours Thursday, Tollison rocked at the gazebo --- all by herself.

“I get more money playing on my own. With that money I can record. Maybe then I get in a band again,” Tori said. "My bands are always breaking up and it’s sad, because it’s like breaking up with four boyfriends.”

You can hear Tollison's performance at the Cooper-Young gazebo here. 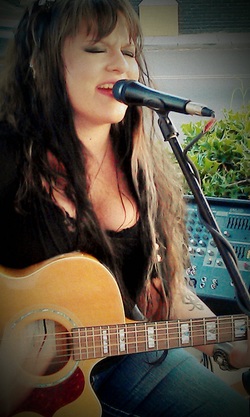 Artist Tori Tollison ( photo by Barbara Werner)
Tollison started playing guitar when she was 8 years old. For 10 years now she has played professionally in bars, mostly on Beale Street.

Most of the songs Tollison plays are covers of rock, pop, country, blues and alternative bands.

“I play a little bit of everything, a little bit for
everyone. I try to be personal so I mix up, because I don’t want to stick to one genre,” explained Tori, who laid down a paper with her song program next to the
guitar bag. “I take my favorite hits and put them on a list and then give it to you, to the audience.”

Before Tollison started playing she took out a glass of honey. She always drinks a few sips of that to coat her vocal cords, she said.

At Night Out, Tollison mostly played covers as well as a song she wrote.

The single, “Bed You Made,” is about cheating in a relationship and will be released at the end of October.

“My music, when I do original stuff, is more alternative. People call it organic rock, but I don’t know what that means.”

Tollison's plans are clear: She wants to play concerts and collect money to record an album.
Besides that she wants to get her Associate of Arts degree from Northwest Mississippi Community College.