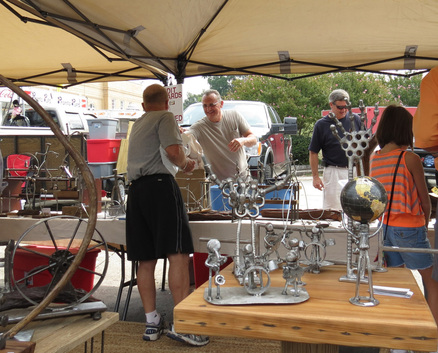 This is the second year at the festival for Gary Jackson of HomeDecor.
The 2012 Cooper-Young Festival drew an estimated 125,000-130,000 people to neighborhood streets on Saturday, September 15, taking in the sights, sounds, and food that lined Cooper Avenue and some of the side streets that intersect this main artery of the Cooper-Young neighborhood.

Among the many vendors at the festival this year was a local business from Bartlett known as HumanDecor.  The owners, Gary and Karen Jackson, create art and jewelry with many of Gary's pieces made of metal that are usually welded together.  This was his second year at the festival, and he said that he sold just about everything he brought with him.

Jackson said that he started working on his creations in May so that he would have enough to bring and sell at this year's festival.
Along with what Jackson had to offer, visitors could find all kinds of art, crafts, antiques, collectibles, and an array of other items at the Cooper-Young Festival, which celebrated its 25th anniversary this year.

Aside from the vendors who had something to sell, there were many others who were representing and promoting various profit and nonprofit organizations that included the Greater Memphis Greenline, the Wolf River Conservancy, Memphis Heritage, the Tennessee Equality Project, the Memphis Gay and Lesbian Community Center, the Humane Society and many others.

In addition to those who were selling and handing out information about their organizations, there were numerous other vendors offering a wide range of things to eat and drink with a couple of the restaurants getting in on the action.
The festival also had music for many to enjoy with several performers starting at noon and continuing until around seven in the evening.

According to the Cooper-Young Business Association, the festival is largest single day event in the city of Memphis.