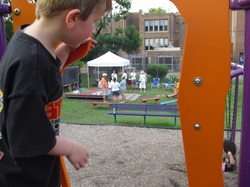 After the CYCA’s former president, John Kinsey, moved to North Carolina, former Vice President June Hurt stepped up to the role of president, committed to maintaining the “coolest neighborhood in Memphis.” The picnic was her first event as president.

The meeting was a casual picnic without an itinery. It was a chance for neighbors to catch up. Organizers wanted it to be an opportunity for parents to come if they once had to miss the meeting to stay at home with the kids.

Neighbors shared popsicles and cupcakes decorated with rainbow sprinkles and chocolate bars (the creative genius of one of one 5-year-old children present).  Children chased each other, shouted for attention whenever they climbed to the top of the play set, and impatiently demanded that any nearby adult push them on the swing.  The adults watched the children out of the corner of their eye. They gathered in a circle and talked about the neighborhood.

Kristan Huntley, a North Carolina native, said that her favorite thing about the Cooper Young community is that all neighbors watch out for each other. There is a strong sense of community in the entire neighborhood. She said, “Even though you don’t know their name, you recognize their face.”

Huntley said that when she moved to the neighborhood, she immediately felt welcomed.  When she returned from running errands one day, she noticed an enormous rock sitting in her yard.  Her elderly neighbors across street surprised . “They said they wanted to keep it for themselves, but this way they could look across the street and still see it,” said Huntley.  Never having received a rock before, she gratefully accepted the gesture and felt at home. Today, the rock sits in her yard.

Hurt, CYCA president, also said she loves the close-knit community of Cooper Young. She grew up in east Memphis in a cove where the only neighbors her family knew well lived directly beside and behind her.  Hurt said, “We were super close, but we didn’t really know the other neighbors in the cove."

Hurt said her mom was close to tears when she moved to Cooper Young.  Her mother worried about crime in the neighborhood. While driving to her new Cooper-Young home one day, Hurt received a frenzied phone call from her mother. The neighbors in her old East Memphis neighborhood had been robbed.

She said it was a different story in her new community,“I pulled up to my house and noticed I was the victim of a drive by 'ferning.' My neighbors bought ferns for my porch because they said I needed some ‘fabulousness’ in my yard.” That’s when Hurt felt at ease with her decision to move to Cooper-Young.

A new project Hurt is undertaking as president involves helping animals.  According to Hurt, too often animals (particularly dogs) are seen wandering the neighborhood. Some dogs unfortunately slip out of their collars while squeezing through fences during their escape. With a cohesive community such as Cooper-Young, it is likely that someone will recognize the dog and return it to the rightful owner.  However, in the case that neighbors are not able to recognize the dog, they can turn to social networks on the web such as the Cooper-Young website  or Flickr site.

The Cooper-Young website updates missing or found pets under the forums tab, as seen here.

On Flickr, you must be logged in to your account and search “cooper young pets.” To help return missing animals to their homes, CYCA encourages every pet owner in the community to upload images of their animal and add the tag “cooper young pet.” If someone finds a tagless dog in the Cooper Young area, they can locate it’s owner on the website.

The Cooper-Young Association offers additional advice for those who have found or lost pets.

Lindsey is a summer intern for MicroMemphis.  She is covering general assignment reporting in Cooper-Young and will continue reporting for the site in Fall 2011.