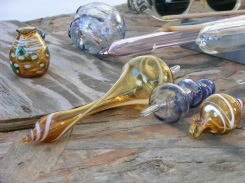 “We have a lot more foot traffic.” Young Avenue Glassworks had been open for six years on Young Avenue before Ashly Snyder moved it to South Cooper Street. “We were kind of hidden away. Few people would come across us by accident.”

This has changed significantly since the shop is located in plain view on busy South Cooper Street, says Ashly Snyder, who had taken the shop over from the former owner two-and-a-half years ago. “People who walk by come in and have a look around.”

The new location is also a lot bigger than the old one. “We have almost triple the space we had before.”

Space enough to offer a larger variety of goods. “We rarely had any clothes. Now, part of the shop is a boutique, to make it more high-end.”

The new location also has enough space for a studio in the back of the shop. “We will set it up in spring. It will cost quite a lot of money, but it will be worth it.”

When the studio is finished, Cooper-Young Glassworks will be offering glasswork workshops, too. “I have already done individual lessons, but I want to open the doors to everyone. It will be very hands-on classes in small groups.”

Cooper-Young Glassworks & Gifts sells jewelry, clothes, and incense. But at the heart of the shop are the pieces of glass art - pipes, jars, cheese plates, tumblers, wine and shot glasses, pens, clocks, and glass baubles. “Most of the glassworks we have is functional,” says Ashly Snyder. “Non-functional doesn’t sell as well.”

The glasswork is made by himself and other local glass artists. “We are the only shop of this kind in the neighborhood,” says Ashly Snyder. “And definitely the only one in Memphis with a selection of locally blown glass as large as ours.”

To celebrate the new location, the owners of Cooper-Young Glassworks held a glassblowing demonstration.

Miriam Hegner covers Development/ Residential/ Business for MicroMemphis.
You can send her story ideas here.
Follow her on twitter ( @MiriamHegner ).