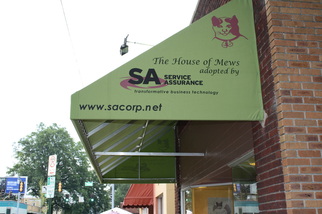 Whether you’re a cat person or not, you might be surprised to learn what Cooper-Young, a local business executive with feline allergies and 9,000 cats have in common.

Guessing Elain Harvey would be a good start.

She’s the founder and managing director of Puddy Tat Protectors Inc., which operates as The House of Mews, located at 933 S. Cooper near the heart of the Cooper-Young neighborhood.

What started as an act of kindness in 1994 when Harvey worked in Germantown has transformed into the animal rescue nonprofit that has been featured far and wide, from the Memphis Flyer to Southern Living. And in a city that’s seen its fair share of animal rights-related uproar this year, the compassion exhibited by Harvey has sparked additional acts of compassion.

Among the most notable was local IT management provider Service Assurance's pledge of $36,000 to cover the organization's mortgage last summer.

Hard times had fallen on The House of Mews as operating costs added heavy strain to Harvey’s financials. Ready to sell her own home just to keep the organization afloat, the Memphis Flyer ran a piece about Harvey’s situation.

That article caught the attention of owner Mark Giannini and co-owner Kelli Mitchell at Service Assurance, which then pledged its sizable donation to The House of Mews.

“I didn't know Elain but of course I knew about the House of Mews," Giannini said.

Despite the act of kindness, however, Giannini has yet to pay his respects to the organization in person.

"I called her up to chat and she invited me over, but I couldn't come since I'm allergic to cats,” he said.

Allergies notwithstanding, Giannini still admits he has a place in his heart for cats -- his family even has house cats, although he said he can't spend as much time with them as he would like. So it only made sense that he found a way to help in any way he can.

But it doesn't change the fact that The House of Mews remains in the minority of local animal rights advocates.

“Memphis is sort of behind the curve when it comes to things like this,” Harvey said, emphasizing that The House of Mews is a no-kill, spay/neuter shelter, unlike the City of Memphis Animal Services Center, which euthanizes animals exceeding a certain weight or duration of stay. While Harvey certainly has a stance on such practices, she says being in her position as an advocate makes it difficult to maintain an overly passionate reputation.

“Name-calling and bashing certain people isn’t going to get me anywhere,” Harvey says. “It’s going to do more harm than good.”

But while the city may be lacking in hard-core animal rights activists, its population of cat lovers is fairly evident.

Harvey's volunteers span the gamut from executives at Morgan Keegan to prosecutors in the district attorney’s office to current and retired university types and everything in between.Rest assured that Giannini would donate his time were it not for his pesky allergy.

"My business partner, Kelli, is very much a cat person," he adds. "And we have had an office cat for about 14 years. We found a stray that just showed up in the middle of winter. We brought it in to feed it and it's still here."

Ultimately, the goal of Giannini and Mitchell's act toward the House of Mews was simply to make a difference. He said the actions on behalf of Service Assurance not only make a difference for Harvey and the furry residents at 933 S. Cooper, but also for the people who adopt the felines into their own homes. In the organization’s nearly 17-year history, Harvey estimates she has taken in and adopted more than 9,000 cats -- that’s more than 81,000 lives, if one believes in wives’ tales.

But The House of Mews isn’t merely some sort of mill for processing feral felines.

“We’ve had to say ‘no’ to people we really wanted to say ‘yes’ to, but we’ve also said ‘yes’ to people that we really should have said ‘no’ to,” Harvey said.

In all, what echoes even beyond compassion, beyond a preference for cats over dogs, are the ongoing demonstrations of responsibility. From Harvey's commitment to provide a no-kill shelter for homeless cats in the community to residents' decisions to adopt adult cats instead of purchasing kittens from mills or pet stores, these actions represent a social consciousness that transcends fulfillment of want.