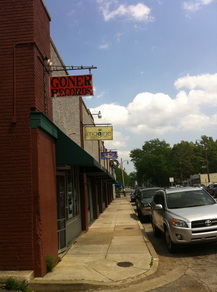 Imagine a place you can go to get vegan-style Memphis barbecue, build your own pizza, ice cream, candy bars, nachos and even "vegan junk food."

The newest kid on the block in Cooper Young is also the first vegan restaurant in the neighborhood.  It promises to have a 100% vegan and vegetarian menu all made from textured and soy proteins. The owner and master behind the creation is Kristie Jeffrey, a mother of two. Not surprisingly, the restaurant will also be kid-friendly.

"It's basically going to be a casual-dining restaurant. We live in the South, so you can count on a Southern-style menu such as fried chicken and hush puppies. The best part is it's all vegan," said Jeffrey.

Imagine will also serve several varieties of beer and wine can be brought in by customers with a corkage fee. The restaurant is family-owned and operated and will have cafe-like atmosphere (shelves stocked with vegan lifestyle books and 'go green' living).

Although the Jeffreys don't life in the Cooper Young neighborhood, they plan to to become a part of the community. They also want to share information with the neighborhood about the perks of vegan eating. The entrepreneurs live on a farm in Mississippi with dozens of rescued dogs, cats, a pig and donkey.

"The overall objective is to raise awareness and do what's best for them without harm, and why not help the environment along the way," Jeffrey said.

Imagine Cafe is set to open at the end of April.