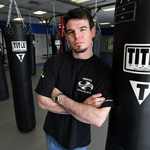 David Ferguson is a retired professional mixed martial arts fighter. He has traveled the world, winning titles as close to home as Nashville, Tenn., and as far away as Copenhagen, Denmark. Since retiring from competition in 2006, he has become a trainer and coach in the Memphis area. He recently expanded his business to the Cooper-Young area, where he runs Memphis Fitness Kickboxing at 2183 Young Ave.

Are you a kick boxer yourself?

How long have you been coaching mixed martial arts?

I began coaching soon after I retired from competing.

What level of MMA do you coach?

Here in Midtown it is mostly just fitness classes. In our other location we coach competitive teams.

Do you own other gyms?

I own Memphis Judo & Jiu-Jitsu in Cordova. I have tried a few other locations that failed.

What made you decide on the Cooper-Young location?

I tried in West Memphis. That failed. I tried in Millington. That failed. So I wanted to try something different and a lot of people told me that it was a really great area and the people in the community were so supportive of small businesses. So I gave it a try, and it has been the best decision I have ever  made business wise.

How successful have you been since moving to Cooper-Young?

I rented one building that is connected to another. After six months, we grew so much that we rented out the next building and tore
the wall down. We love being out there and hope to be there for a long, long time.