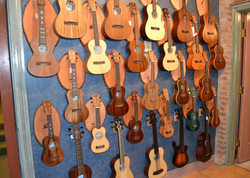 The Midtown Music Shop, which opened in November, is the newest addition to music-oriented shops in the Cooper-Young Area, offering instruments that are a little different - everything from ukuleles to mandolins to banjos.

Located at 2272 Central Ave., Midtown Music was started by Jeremy Barzizza, who has been repairing instruments, namely saxophones, for years. He is a musician as well, and wanted to do more with his passion.

“I found this place, and just started trying to figure out how to make it pay for itself,” Barzizza said. “And I’m really interested in spreading the joy of music to the community.”

Though this is not the first shop of its kind in the area, he said that the shop has a number of things that makes it unusual from other shops. For one, the types of instruments that the shop has vary. Among more common instruments such as acoustic guitars and trumpets, there are more uncommon ones such as mandolins, banjos and ukuleles that adorn the walls of the building. Barzizza particularly talks about the importance of the ukulele, and why it is a great first instrument.

“I feel like ukulele, in particular, is a really accessible instrument for most everybody,” he said, “and it’s the kind of thing that de-mystifies music, gives people a common ground because of how easy it is and how fun it is to share the experience of making music with each other.”

The place also offers lessons for a variety of instruments, taught by a number of teachers, and also voice lessons, which first-time customer Daniel Stovall was interested in.

“I wanted to ask about voice lessons; for musicians like me, who can play the guitar but can’t really sing with it,” said Stovall. “I like the idea that you can come here for a number of things, like ukulele and guitar, and this shop can be for people who are already musical and people who want to be.”

Another thing that Midtown Music offers is a music studio, located at the back of the store.

“The idea is that a person walks off the street and any instrument that he could possibly want, whether it’s the accordion, banjo, harmonica, or the soprano saxophone,” he said “is going to be here, and we’re going to have a teacher, one of the top players in town to be able to instruct and get you going, and hopefully we could get you a place in the band and record you.”

The notion of anyone coming to the Midtown Music Shop, whether musical or not musical, is encouraged, and this shop can be friendly towards amateurs. On the shop’s Facebook page there is information about new happenings with the shop, and among these is what Barzizza calls the “Ukulele Circle”, which began only in February, and occurs on Tuesdays and Thursdays. It has a growing interest among both kids and adults, going there to be among other players who are learning just as much as they are.

“They do it in a group setting among peers so they don’t feel a lot of pressure,” said Barzizza. “Everybody is helping everybody else out, so it’s a very cool laidback hang and just a lot of fun.”

In the end, the Midtown Music Shop is very young, but Barzizza feels optimistic about it.

“It’s awesome,” he said. “There’s a lot of trial and error, and we’re still feeling everything out, but it’s been a lot of fun.”