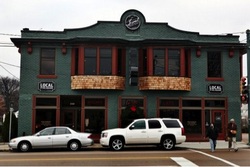 It has been questioned by local residents what are the property managers and the city doing to keep customers, other businesses owners and employees safe.

Victoria Lewis was once a server at one of Overton Square’s restaurants, Local Gastropub. When Lewis’s shift ended in, Jan. 2014 she went to her car to find her window busted and the radio inside was stolen.

“I very upset with the incident, I feel like the area can be more patrolled, but I understand that police are doing the best they can,” said Lewis.

At least two restaurants have been robbed since the beginning of the year. In March 2013, a safe was stolen from Local Gastropub.

Loeb Properties are confident in their security and their plans to secure the customers and employees in the area.

Bob Loeb, president of Loeb Properties, has hired a security consultant. They are working with a private security firm and Memphis police.

Shaw has worked in the midtown area for several years. He has worked at many establishment in the Midtown area.

“This is a great area. The police and security are doing what they can for the area. Any time a worker or guest feels uncomfortable they can call the security and they are always available to offer their services to anyone that needs it”, said Shaw.

In the past year the new security have installed 60 security cameras in the area to give extra security and make people feel more comfortable.