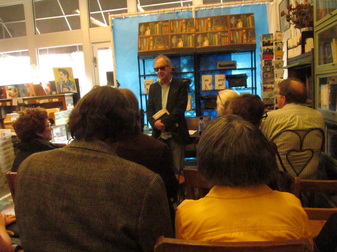 A group of about 20 people gathered to meet, talk and take pictures with Arvio, who also signed copies of her book, at the store on 936 S. Cooper St.

A collection of 70 annotated poems based on 10 years of psychoanalysis on Arvio, the book reveals images and memories from Arvio’s dreams that she studied, analyzed and took notes on during her sessions.

Arvio, 60, said the book took a year and a half to write — long after the actual analysis which occurred between the times she was 35 and 45 years old.

She said the images in the book are “quite strong” and “emotionally difficult.”

She said people do not want or need to know what happened to her to require the psychoanalysis.

“By reading the book, you discover it. The point isn’t what happened,” she said.

Arvio said the notes are in important.

“Some people resist the notes part of the book because it’s too intimate,” she said. “Some people, especially young women, say it’s a life changing experience.”

Arvio, who attended Columbia University and translates Spanish and French for the UN, also read from her other two books “Visits from the Seventh,” and, “Sono: cantos.”

After the reading, she did a question-and-answer session with attendees and signed books.

Cheryl Mesler, co-owner of Burke’s said she and her husband, Corey Mesler, try to host book reading at the store at least once a month. They are always free and open to the public.

“Usually we try to get someone with a local connection,” she said. “It’s a good opportunity to get people in that we usually wouldn’t.”

The next book reading is Thursday, May 1 from 5:30-7 p.m. Corey Mesler will read and sign from his book, “The Catastrophe of my Personality.”