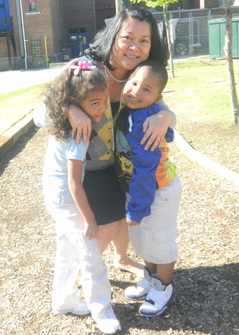 Kongsouly Jones has been the principal at Peabody Elementary for six years.

Peabody wasn’t Jones’ first time in the education ring.  She went from being a teacher at Douglass Elementary School, to Instructional Facilitator, to Assistant Principal at Crump Elementary. That eventually led her to the Cooper-Young public school, Peabody Elementary.

That adds up to over 17 years of experience in the field of education.

“Time goes by fast when you love what you’re doing,” said Jones.

When asked how many children she had she automatically answered, “We have about 400.”

When the question was rephrased — to how many children she goes home to — she said one. That’s her 11-year-old daughter Kyrrith, who attends White Station Middle School.

Jones is originally from Laos, and moved to Memphis when she was 9 years old. She’s been here more than 30 years.

She studied for her undergraduate degree at The University of Memphis, and then a few weeks after her graduation, she immediately went to graduate school.

“I was just thinking what else can I do,” Jones stated. She has great pride in her alma mater, which is seen by the U of M flag handing by her desk.
“Sometimes I just walk on campus, and think I just love that place.” Jones said after reminiscing on her own college days.

Those college days helped bring her to Peabody.

Specifically, she remembers the 33rd BBQ in the parking lot of the school where she was being introduced to parents and the community as the new principal.
Through it all Jones says she really appreciates the teachers and parents.

“People have pride in what they do,” Jones said that’s what makes their school great.

“They understand their obligation,” she continued, referring to the teacher’s dedication to the students.

These students love their principal. When Jones walked out onto the playground, an an echo of “Hello Ms. Jones” sounded by little voices, and soon arms hugged around her before she even reached the gravel.

In particular, an enthusiastic 4-year-old named Dereck ran from the opposite side of the playground to hug his favorite principal. She says he does it every time he sees her.

Jones also has fans from the school’s staff.

“She comes in, in the morning and she’s so chipper, when some people are dragging,” said financial sub secretary Gloria Dowdy.

Presently Jones and her daughter live right outside of the Cooper-Young area near University of Memphis.

In her spare time she loves to read, cook, and practice a little retail therapy.

She also joins her parents in outings with other native Laotians, where she remarks that she’s the one every asks how to send their kids to college, or how to write good college essays.

Principal Jones also mentors other aspiring principals. That includes two so far that have gone on to principal positions of their own schools.

“Sharing your knowledge and then seeing them move to a new level going on to what they aspire to be, that’s rewarding for me,” Jones said, “When you see good people who actually enjoy doing the work and actually truly care about children and our community and our district you want to see them in that position.”

Looking to the future, Jones believes that she’s just going to see what happens.

"I love being connected to the children,” she said, “I love being the principal. That’s my favorite thing to do.”