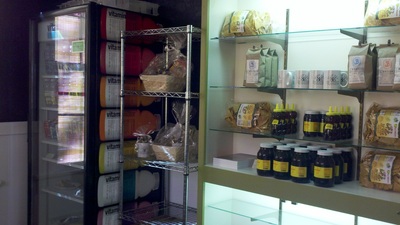 Since the closure of Au Fond on Cooper, the breakfast and lunch choices in Cooper-Young have slimmed down.

But now, a new player is bringing breakfast back to the neighborhood, another eatery is starting lunch, and a small market for local products is growing.

The newly opened Stone Soup Cafe & Market is bringing pancakes back to the south end of Cooper.

"There was a niche for it in the neighborhood," general manager Troy Norwood said. "Sharon Johnson was the driving force behind this and since she used to have a restaurant previously -- named Buns on the Run,

everyone was wanting the same thing that was offered there,and that was breakfast. It is what she cooks well and that's why we offer it here."

Not only does Stone Soup serve breakfast, but they have begun to stock a small market full of take-home items from the Stone Soup kitchen. Some of the bread and jellies and other ingredients that the restaurant uses are sold there, but don't think this is going to become the local corner store.


"The idea or concept of having a market was definitely in the works as this whole thing was coming along," Norwood said. "We didn't want to necessarily bring  in items in the market just to have the market full. We wanted to celebrate the community by having locally produced and packaged products where we can support local producers and packagers."


Have some ideas for what you want to see in the Stone Soup market?  Share your ideas on their Facebook Page. 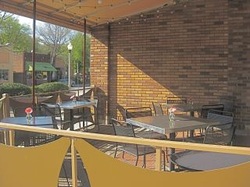 Picture from Cortona FB page
Stone Soup also serves lunch and now, so will another neighborhood restaurant that used to be a dinner-only spot.  Cortona Contemporary Italian is located at the intersection of Cooper and Young. And for a while, you could only get dinner from 5-11 on  Tuesday to Saturday evenings, but now Cortona is giving customers the opportunity to get Italian food during lunch time -- on Friday through Sundays from 11 -2 p.m.

"We are trying to bring a crowd here to the Cooper-Young area," co-owner and head chef David Cleveland said. "It kinda made sense to be open during that time because there are other places that are open and that serve lunch around here too."

Cleveland says that in addition to other restaurants in the area having success during lunch, his restaurant wanted to offer another amenity to the community - it's outside seating on nice weather days.

But in doing the lunch menu, there have been challenges along the way.

"Marketing, advertising and getting the word out has been tough because people don't know much about us still," Cleveland said. "Also the fact that we prepare our food fresh and it comes from Italy, it takes pretty much all day to prepare our menus. People are here around the clock in the kitchen preparing meals."

Both Cortona and Stone Soup say they plan to expand their menus in the future, but agree that they both need more time to get what they do best down first.

But that hasn't stopped Cortona from adding yet another change... the restaurant has added a $5 'happy hour' Monday through Friday from 5 p.m. to 7 p.m.  You can follow their specials on their Facebook page.

Read this MicroMemphis article about the opening of Stone Soup
Experienced chef, partner to bring home cooking to Cooper-Young

Adam Douglas is the lead Food reporter for MicroMemphis.
Send him story ideas here
You can also follow Adam via twitter: @ajjourdan .