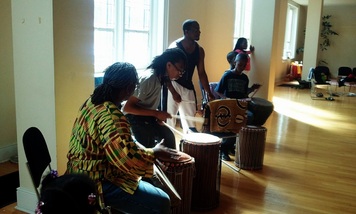 It stands for solidarity, vitality, and life in its culture while its rhythmic sounds bring people of all ages together. The movements performed to its beat let people know they are all different yet still cut from the same cloth.

It's the African drum, and it resonates as the core for most African dances. During the 24th year of the Cooper Young Festival, you could hear its powerful strokes resound throughout First Congregational Church of Christ on Cooper Street.

During the CY Fest, held annually in the historic district of Midtown Memphis, you can get a full multicultural experience just by walking down Cooper Street or Young Avenue. This year, the festival gave the opportunity for people to discover their roots through free African dance classes taught by the Ngoni African Drum and Dance company.

"African dances, unlike many other cultural dances, are for more than entertainment," said Marcus Hurt, founder of the Ngoni African Drum and Dance Company and University of Memphis student.

"They hold social and historical significance because they not only help tribes and communities celebrate special events but they also tell stories and record history," said Hurt. 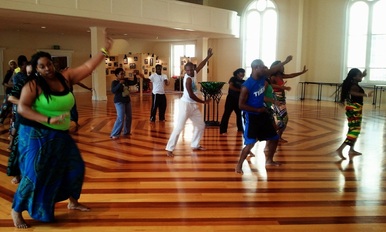 Yankadi Macru - a flirtatious African dance originating from Guinea
Hurt's passion for African dance is what drove him to move from New York to Memphis. Here, he started the dance company, which is named after his god-mother, Ngoni Zim.

Hurt's company evolved from the Bantaba Dance Company of Memphis. Ngoni is based in Memphis and has members in New York, Los Angeles, Chicago, and New Orleans.

It offers three shows a year along with several classes and workshops that strive to not only provide a form of vigorous exercise but also exhibit the customs of Africa.

"One of the big things I notice in Memphis was its lack of culture and I decided that I wanted to better inform people about Africa and its history because Africa is in all of us. That's where humanity first made its mark," said Hurt.

Hurt said he was thrilled when he received a call from First Congo asking him if he would provide free classes during the CY Fest.

“I jumped right at it because it would be more exposure for the church, my company, and most of all, a way to expose more people to the African heritage.”

Hurt instructed two different dances during the free sessions of the festival; the Yankadi Macru (Yan-ka-di), a flirtatious dance originating from Guinea, and the Marakadon (Ma-da-ca-don), coming from the Maraka people of Mali, which both employ polyrhythm techniques and total body articulation giving a full workout.

“Those dances had everyone moving everything everywhere,” said Kirsten Grimes, a participant in the classes, “but you could easily see how it brought people together in a collective rhythm while having fun at the same time.”

Vivian is a senior broadcast journalism major at the University of Memphis, where she is also a member of the Track and Field team. Vivian began her broadcast career during her sophomore year at WUMR U92, the on-campus jazz radio station. There, she hosted a bi-weekly broadcast of the jazz top ten countdown. She also assisted in the production of the weekly 30 minute show, Spotlight 92.
This past summer, Vivian interned with WMC-TV Action News 5. As an intern, Vivian contributed weekly stories to their online website, Your Neighborhood, as well as providing story idea inputs in the daily meetings. Upon graduation, Vivian would like to continue her education at Berkeley Graduate School of Journalism in Berkely , California while putting her skills to work at either a small or large market television news station.