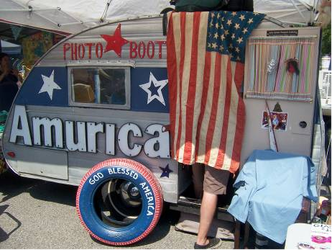 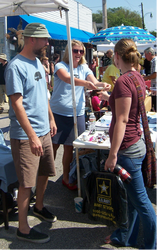 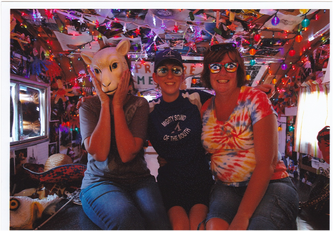 Artist Traveling in Search of Smiles

Jamie Harmon and his fiancé Leah Keys travel the Mid-South with a camper full of animal masks, googly-eyed glasses and celebrity cut-out faces - all with the sole intent to make people smile.

Harmon has been a photographer for the past 20 years, having produced photo projects since the tender age of 12.

His latest project titled “Amurica” consists of a 1960s silver camping trailer in which he recycled into a photo booth. The inside of the photo booth, which he displayed at the Cooper-Young Festival on Saturday, is covered with multi-colored lights and vintage knick-knacks. There is a bench in the center with an array of goofy hats, masks, glasses and cut-out faces for Harmon’s subjects to choose from.

“The idea was inspired by folk art festivals and my love of vintage things,” Harmon said.

The title of his photo booth came to him when he acquired an old Bank of America sign.  The “u” is actually an upside down “n.”

“Amurica” is listed in the Urban Dictionary online. “Amurica” is the way people who live in a trailer park pronounce America, Harmon said.

“When we looked it up online it described ‘Amurica’ as home of the red, white trash, and blue,” said Leah Keys.

Harmon created the booth with help from his 12–year-old son, Gus. The two of them transformed the inside of the trailer from a camping hub to a whimsical photography backdrop.

“It incorporates my love of multi-functional things while filling a need for the art community and my own creative outlet,” said Harmon.

Harmon bought the trailer in January, and it was up and running as the Amurica photo booth by the end of February.

“It’s constantly evolving. I’m always layering things inside it,” Harmon said. “If it was ever finished I’d be like, ‘Okay, on to the next thing,’” he said.

Harmon’s birthday party was the photo booth’s first appearance, but the space was made for the Doo-Nanny Festival in Seale, Ala. Harmon created an intimate space filled with miscellaneous vintage memorabilia for festival goers to record oral history of the festival’s origins.

Harmon and Keys now take the booth to local festivals and events. The booth is available for hire. Harmon and Keys have recently attended The Cooper-Young Farmer’s Market and a class reunion at White Station High School.

Harmon said while he enjoys the photography aspect of capturing people’s moment in his booth his favorite thing about what he does is being able to interact with other people.

“When people see it I want them to say, ‘Oh my god. I want it. I want inside it!’” said Harmon. “The goal was to create a space that makes people smile.”