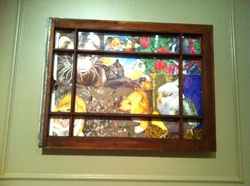 New York Street wasn’t just buzzing from the music emanating from the  porch of Central BBQ or the soccer game being played around 6pm on September 15. The David Perry Smith Gallery had its own reason to be lively.

The gallery was the location of the 2011 Art Invitational and Kick off Party for the 24th annual Cooper-Young Festival.

Each room in the gallery held tables filled with finger foods and the walls were outlined with unique pieces of artwork.


William Charles from the William Charles Band entertained the crowd with live music and was more than happy to be making his first appearance at the invitational.

“I was glad to be a part of Cooper Young Festival this year because it reminds you that Memphis is still a place that thrives on its heritage and culture,” said Charles.

One of the many artists featured at this year’s Cooper Young Festival Art Invitational was Darla Linerode-Henson. Her piece of artwork titled “Happy Pets of Cooper Young” brought special recognition to the Cooper Young neighborhood. A cockatiel, ferret, cat, Boston terrier, Welsh corgi, and rescue corgi were all featured in the piece. Henson chose to highlight pets that live or have lived in the Cooper-Young neighborhood. Henson sold posters of this artwork at the festival, with a percentage of the sales going to the Guardian Angel pet rescue group.

Henson framed her art with an old bungalow window she found in Cooper Young. Also, she recently painted three of the tigers displayed on the University of Memphis campus for centennial celebration.

Rhonda Test said of Henson: “We’ve been friends for 31 years. She’s my best friend, my mentor, and she is also an amazing and smart art instructor.”

Henson teaches art at Presbyterian Day School in Memphis, but said, “I might as well live in Cooper-Young; I am always here visiting friends."

Another artist featured at the event, Christine Conley, said she moved to Cooper Young because “I loved the community feel of the neighborhood, that’s why I have lived here for eight years.”

The David Perry Smith Gallery Thursday night offered a strong sense of community. Whether admiring a sculpture by Dan Spector titled “Kathy”, Darla Linerode-Henson’s Cooper Young animal tribute piece, or Paula Kovarik’s artistic quilts, each piece of artwork at the Artist Invitational had a story behind it. It was evident both the artists and spectators were excited and ready to get the weekend and festival under way.