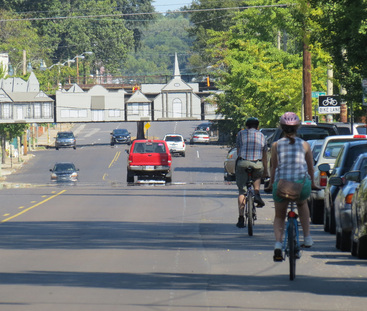 Cyclists on Cooper riding on what will soon be a bike lane.
September 23, 2012

Those anxiously awaiting the arrival of the bike lanes in the Cooper-Young neighborhood will not have to wait very much longer, according to the Memphis Bike and Pedestrian Coordinator, Kyle Wagenschutz.

"We had already completed all of the repaving work that we had in the area and have put down a new centerline and temporary striping on the road surfaces," Wagenschutz said.  He also said that the guidelines for the bike lanes have been sketched out for where the new bike lanes will be.

Instead of paint being used for the striping of the bike lanes, Wagenshutz said, it will be made of a thermoplastic.  This is a polymer-based material that becomes solid after it cools.  Wagenschutz  said that this has a much longer life span than paint does.

In order to complete the striping project, the contractors performing the work must have the proper weather conditions for it to cure.  Weather permitting, this project should begin and be completed any day now, Wagenschutz said.