Success of Memphis' Only Movie Store: Owner Lodges at Business 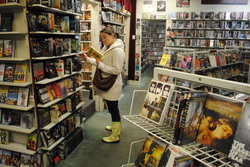 Since Black Lodge Video has become Memphis’ only video store following Blockbuster’s bankruptcy, not much has changed.  But while you were in the store browsing the movie selection, you probably didn’t know that the owner resides directly above your head.

Owner Matt Martin lives in a one-bedroom apartment above the business. He considers this to be key to Black Lodge’s success. That, and the fact that Black Lodge rents the building and therefore has never bogged itself down with loans or mortgages. Martin, then, attributes Black Lodge success to the fact that he did not start off his business in debt, amakes a single payment for where he lives and works,  is able to spend more time working.