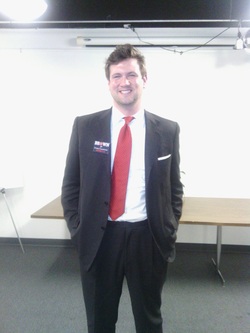 Jake Brown, a life-long Memphian, grew up in the Germantown and East Memphis areas. After graduating in 2011 from the University of Memphis with a bachelor’s in math, Brown wanted to leave the suburbs for an urban setting.

He sought after a neighborhood with culture, charm, and a sense of community. That neighborhood was Cooper-Young. He now resides at 43 N Cox St.

“I don’t think we need to turn other neighborhoods into Cooper-Young, but I can’t think of one who wouldn’t benefit from being a little more like it,” Brown said.

After serving as a strategist for the 2012 Obama campaign, Brown’s interest in local and state governments grew.

He moved on to work for Rincon & Associates, a political consulting and lobbying firm.  This is where he decided to run for District 10 County Commission.

Shortly after, Brown said another candidate attempted to keep him from running, saying that it would ruin Brown’s career. The confrontation gave Brown more drive to continue.

Brown declined to say who the candidate was. He is competing in the May 6 Democratic primary against Martavius Jones of 1398 Worthington Circle and Reginald Milton of 1534 Marjorie Street. The winner will face Republican Geoff Diaz of 236 S. McLean Blvd. in the Aug. 7 general election.

Brown said that other commissioners try to line their position with national issues.

“I think that’s a mistake. When it comes down to what makes an impact on people’s lives, it’s local and state government.”

The candidate has plans for District 10 that are as big as building new infrastructure and as simple as equality between neighborhoods.

Brown wants to protect the small business in Cooper-Young, Overton Square, Cross Town, and surrounding areas. He plans to do so by bringing awareness to Mayor A C Wharton’s plans for the former fairgrounds. Brown said that by putting large retailers there, local business would suffer and be required to pay additional taxes for the new infrastructure.

“You won’t increase demand by increasing supply,” the candidate said.

He also plans to see to it that basic city services are applied equally. “It’s not exciting, but it’s more important,” Brown said of the plan.

Brown recently worked to abolish the statute of limitations on rape and aggravated rape cases in Tennessee. He and a group of citizens lobbied the state legislature, and the bill was recently approved. In the future he would like to see more state programs to help the survivors of these cases.

To summarize his campaign platform Brown said, “ We need to treat people right and equally. We need to make sure our priorities reflect that.”