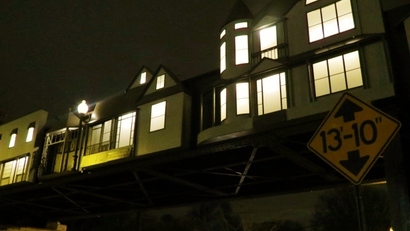 Feb. 21, 2013 - It is no surprise that the residents of Cooper-Young take pride in their community. Pulling itself out of the depths of its dismal days in the 1970s, the Cooper-Young community has built itself up to become one of the most esteemed neighborhoods in the country according to the American Planning Association.

As a beacon of the neighborhood’s success, the Cooper-Young Trestle Art Gateway was created in 2000 by artist blacksmith Jill Turman, and perched onto the century-old rail trestle at the community’s entrance on Cooper Street.

The 150-foot steel sculpture, weighing in at eight tons and ranging from six to 16 feet, is a difficult sight to miss for passersby. Nevertheless, every day after the sun sets, the Trestle Art comes to life as LED lights give the houses and businesses depicted in the street art a soft and convivial glow.

To maintain that glow, the Cooper-Young Community Association foots the monthly $50 to $75 MLGW light bill. In hopes to keep the Trestle Art shining and eliminate electricity cost from maintenance fees, the CYCA has come to one conclusion:

The CYCA pays for the $400 to $700 annual to bi-annual light bulb replacements, and over the years, this cost adds up. The association hopes to turn that around with the use of solar panels.

Kristan Huntley, community director of the CYCA, looks forward to the benefits of going solar.

“The immediate turnaround is we use less energy,” Huntley says, “The other nice thing is hopefully the bulbs won’t have to be replaced nearly as often so you’re cutting down on the short term cost and long term costs.”

In terms of power for the Trestle Art, Huntley says the solar panels should free the CYCA of power costs from MLGW completely.

“When the solar panels are in we will technically be energy-neutral,” Huntley says, “and in the instance that we have energy left over past what our lights need, we actually can sell it back,” says Huntley in reference to the Tennessee Valley Association’s Green Power Providers program in a joint venture with MLGW.

In the meantime, to help with the cost of the solar panels, Cooper-Young’s annual Arts for Art’s Sake Auction will raise money through the auction’s proceeds.

According to the auction website, the “goal this year is to raise $15,000 to retrofit the Trestle Art with solar panels to compliment the LED light bulbs that were just installed.”

The auction will take place on Saturday, April 13 at Young Avenue Deli from 6 to 9 p.m.

Artists are encouraged to donate their work to the auction in return for perks ranging from exposure on the auction’s website and social media outlets to an artist profile in the April issue of the LampLighter and the chance to have a gallery show at the Cooper-Young Community Association.

Even more, the artists will have the comfort of knowing they helped keep the lights of the Trestle Art shining for one of Memphis’ most prized neighborhoods.

For more information about the auction, visit the Arts for Art’s Sake Auction website.

Also, read more about the Trestle Art and the artist behind it, Jill Turman, owner of Bella Ironworks.