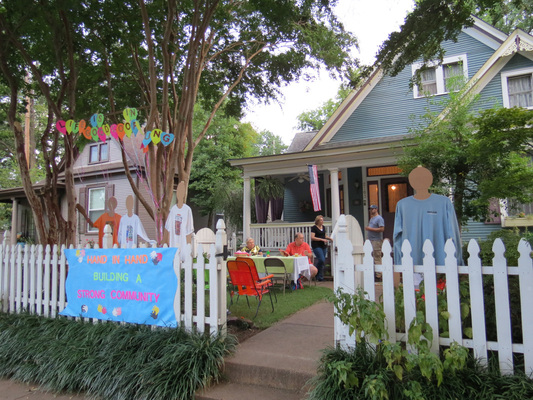 Buzz and Judi Shellabarger, 2103 Nelson Ave, hosted their first light-the-way party.
With some of the homes decorated or lit up, chairs pulled out on the sidewalks, and with a few grills nearby, the Cooper-Young neighborhood welcomed thousands of runners during the 4-Miler Run on Friday night, September 14.

Many Cooper-Young residents who own homes along the route hosted  Light-the-Way parties to watch and cheer the runners on as they made their four-mile trek.

Buzz and Judi Shellabarger hosted their first party at their home at 2103 Nelson Ave., which was near the race's three-mile marker.
Among the Shellabargers' guests were Ray and Trudy Hatton, who had a daughter, son and a daughter-in-law participating in the four-mile run this year.  They were among approximately 2,500 who registered to run this year.  The Hattons also had several friends who participated in the run from their church, First Baptist, on Poplar and East Parkway, where Ray Hatton is the minister of music.

"It was really a lot of fun and we all loved cheering on the runners," Hatton said.  He was especially proud of his daughter, Holly Hatton, who was participating in her very first event.

Sammy Rich was another guest of the Shellabargers and it was also his first time to attend a Light-the-Way party.  Rich is a long-time resident of Cooper-Young and has lived in the neighborhood more than 40 years.

"I really had a great time seeing the runners and it was a wonderful way to spend an evening and a good way to meet some of your neighbors," Rich said.  He said that Cooper-Young is a really good neighborhood and that it has, for many years, benefited from a strong business and neighborhood association.

Across the street from the Shellabargers, Carter Speed and his family were also hosting a party.  He said that his wife and some of their friends had done the run in the past, but recently they decided it might be more fun for them if they just held the party instead.

Holly Hatton said she really got an adrenaline rush from all the crowds along the route.  Hatton conceded that, while it was hard for her to do the run, she had prepared for it and really got a big boost when people would applaud and give her high-fives.