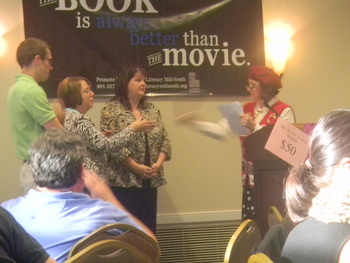 Different companies and groups, such as Hilton Worldwide, Regions Bank, and Rhodes College, created teams with adult members to compete.

$400 reserved a table for a group, which included three spellers per table. All proceeds were donated to Literacy Mid-South towards their mission.

The Memphis Daily News was the major sponsor of the event followed by Hilton Worldwide.

“Every dollar you spend tonight will go to the people who can’t read,” Dean informed the crowd, while encouraging teams to “try the wine” to promote more donations.

The event included a panel of judges such as local celebrities Kym Clark anchor from local television station Action News 5, Elise Preston from Channel 3, and Reginald Milton, a board director of Literacy Mid-South.

Local actress Ann Marie Hall was the emcee of the bee, and kept the audience laughing throughout the competition.

“You must watch a lot of True Blood,” Hall joked during the pop culture round when the name ‘Sookie’ came up in her list.

The donations didn’t stop with the ticket price. During the competition, over 8 teams competed for the title of winner. When a team came up against a difficult word, they could be given a new one for a tax-deductible donation of $50. For an additional $50, the team could pass the word to a rival team of their choice.

To indicate the want for a new word seated team members would flag one of the yellow $50 signs to the podium. Fortunately for Literacy Mid-South, there was a lot of yellow in the air in the Botanic Gardens banquet hall.

There can only be one winner, and the women of the B.C.B.’s team took home the title and the prize of free Yolo frozen yogurt for 20.

Board member Ashley Dacus said she hand picked the team, and appreciates the mission of the competition.

“It’s a great fundraiser and a good to flex our intellectual muscles,” she stated after her team’s victory.

“It’s a brilliant way to have fun and raise money for a good cause,” she concluded.

Danielle Wilburn covers Community for MicroMemphis.
You can send her story ideas here.
Follow her on Twitter ( @Daniellej_08 ).