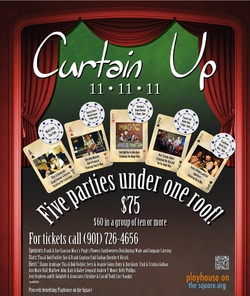 When the lights go out, the curtain goes up — and the party begins.

Actually, there are five different parties, and they're all under one roof. Curtain Up, presented by Playhouse on the Square, "will offer something for everyone this year," said Courtney Oliver, director of special events at Playhouse and the events director for Curtain Up. The event, set for Nov. 11, features everything from wine, champagne and cheese to sliders, foosball and beer; but it's really the entertainment that keeps people coming back to the annual event spotlighting local Memphis artists.

Each of this year's five parties will feature a distinct atmosphere with different food, drinks and music. The beginning of the event will be cued by the accordion sounds of  solo band Fille Catatonique in the main lobby, which will also house a grand cheese display accompanied by wine and champagne.

The Playhouse cafe will host a beer tasting paired with the folky, blue-grass tunes of Nay Nay and the Do Right Boys. Avid bar-gamers can get in on some foosball or darts action, as well.

The upstairs ballet rehearsal area will be home to the "Zydeco Martini Lounge" that will feature the band Tout Le Mon — a French phrase meaning 'everyone.' Tout Le Mon, as described by the band's singer, Marcella Simien in an interview with Playhouse, is "swamp romp...raw creole, country, rock, soul, blues, and whatever gets you moving in your shoes."

"This will basically be the room where you can just go and chill," Oliver said.

Meanwhile, under the stage, "the trap room...will be treated like an underground speakeasy, a 1920's gentleman's club," said the director of events. "This is the first time ever that this room will be open."

This room will be a more exclusive party. "Throughout the course of the evening, we will give people passwords to get access to this room. There will be bouncers there as will," the director said.

The trap room will host table games including blackjack, roulette and poker, and era-specific libations like gin and tonic. The entertainment for this party will be provided by the band Black Max.

"I call them vaudeville punk though it's hard to describe them. They are a really a cool band, just totally different, unique, and mysterious sounding," Oliver said.

As the night winds down, headlining on stage at the Playhouse will be a dance party for all featuring The Magic Kids, an indie pop band currently signed onto the Goner Records label.

Oliver described the band as one with "a happy sound." In fact, The Magic Kids have been described by music writers as "contemporary Beach Boys."

To accompany the "bubblegummy dance party," there will be vodka jello shots or, for those choose not to drink, RedBull.

The night will commence with the Golden Coat Hanger Awards.

"Awards will be given out for things like best dressed, best shoes and judges' choice award. This is just for fun so people can have something to look forward to at the end of the night," Oliver explained.

In previous years, Curtain Up has been a progression from one party or room to the next. This year's event marks the first time that all the rooms will be opened at the same time so that people can "choose the environment they want to be in, whether that's beer and country blue grass or martinis and french music or even happy jello shots," Oliver said.

So, which event will you attend?

"In this city, with our economy, it takes a lot of persuasion to get people to attend an event," the director of events said. "Sometimes you have to make these events ADD for adults...and hopefully that will be what inspires them to come back year after year. This is going to be a great night with something to do for everyone and for anyone who loves theatre and art, especially in Midtown, this is a great way to support the theatre."

All proceeds from Curtain Up go towards Playhouse on the Square's annual operating budget. Tickets are $75 for singles and $60 for a group of 10 or more. The party will begin at 7 p.m.

For more information about Curtain Up, visit the event's facebook page, 11-11-11.
Pictures from Curtain Up 2010. All photos are courtesy of Playhouse on the Square's Curtain Up facebook page. Click on the photo for an enlarged picture.

Curtain Up: A Taste of Playhouse

Nov. 11: Playhouse on the Square's 'Curtain Up' featuring The Magic Kids, Commercial Appeal