Cooper-Young Festival: How it Redefined Community 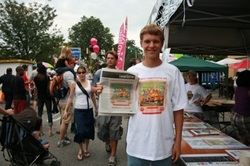 The Cooper Young Festival is a popular destination for Memphians looking to explore a Midtown neighborhood filled to the brim with beer, live music, artisan accessories and local art for sale. The eccentric quality that makes this festival unique is the down-home charm and sensibility of the community that hosts it.

The festival takes place each year in September and marks the culmination of a three-day event that includes an Art Invitational, a four-mile race and the a street fair that funnels huge crowds of people into the intersection of Cooper and Young Street.


It began on November 5th, 1977 as an average community flea-market  equipped with a playground and a stage. It was populated by less than 7,000 visitors and 59 vendors that sold baked goods, artwork, plumbing equipment and even recycled garbage.  It all took place in the parking lot of the Galloway United Methodist Church.

It's now grown into the three-day Cooper Young Festival - a city-wide attraction with hundreds of artisan vendors, several live-music stages and thousands of people. The greatest accomplishment of the festival is the unification and cultural renaissance of the Cooper-Young neighborhood.

The first festival, called the Cooper Young Business Association Street Fair, lured approximately 6,500 visitors. It marked the humble beginnings of the CYBA, which actually lost money its first year -  $100.50 to be exact. After 24 years and the continued efforts of the CYBA and its community, this year’s festival is projected to earn more than $80,000 with more than 100,000 people. Proceeds from the three-day event go towards the development and maintenance of the community and business association.

Executive Director of the Midsouth Peace and Justice Center Jacob Flowers has lived a couple of blocks away from the First Congregational Church in Cooper-Young since he was a child. He has followed in his mother’s footsteps, working as director of the non-profit center.

“The face of the neighborhood has changed dramatically,” Flowers said. “This is one time a year that we get to connect with everyone – old neighbors, friends you haven’t seen in a while, everyone.”

Throughout his life, Flowers has seen the Cooper-Young neighborhood and its festival evolve into a thriving community of artists, activists and impassioned individuals.

“The 4-Miler race is the real community event and everybody loves it,” Flowers said. “The festival brings 100 thousand people here and it’s an opportunity for great exposure.”

The Cooper Young residents are not only involved with their community, but they also enhance the cultural value of the neighborhood through their own entrepreneurship.  Founder of Radio-Memphis, Rick Chetter, has lived in the Cooper Young neighborhood for approximately six years and runs the online radio station from his home. Radio-Memphis.com exclusively features unsigned Memphis musicians.

“It boils down to a simple fact – Cooper Young is a hot-bed of artists,” said Rick Chetter, founder of Radio-Memphis. “You get to expose yourself to so much talent. It’s an eclectic and unique place to live.”

The festival is the biggest fundraiser for the neighborhood, which has rejuvenated the image of the community and reignited the preservation of the Cooper Young area.

“The profits of the fest are used to keep the neighborhood clean,” said Chetter.

A Chance to Entertain and Educate

June West, executive director of Memphis Heritage said, “Our mission is to educate and advocate for the preservation and adaptive re-use of historical properties.”

West, along with other Midtowners, continue to participate in the festival because it gives them an opportunity to shake hands with Memphians that otherwise may not know their cause.

“Cooper-Young has always had an identity, but the festival has pulled more people here,” said West. “It has brought pride and economic growth to the neighborhood.”

Elizabeth Dierssen has lived in the Cooper-Young neighborhood for three years and attended the festival as a volunteer for Memphis Heritage.

“The cultural and economic diversity is what makes Cooper-Young special,” said Dierssen.

Local businesses welcome visitors, as well. Many of the Cooper-Young businesses see the festival as an opportunity to develop connections with customers as they share conversations about the festival.

Cheryl Messler, co-owner of Burke’s Books, has lived in Cooper Young for the past 20 years and this year marks her bookshop’s fifth year at the festival.

“We got 10-times the normal amount of people in the door today,” said Messler. “People come from all over the city. It’s amazing how the festival has grown.”

Messler, like many others at the festival, enjoys the artists’ booths and scouts out hand-made jewelry, artwork and accessories. Messler insists that she would prefer to never leave her Cooper Young neighborhood, under one condition.

“Everything is in walking distance from my home – My work. My church. My children’s’ school. If we get a grocery store, I would never have to leave again, “ she said.

Those, who live in Cooper Young, seem to genuinely care about their community and they are not afraid to welcome newcomers into their collective family. In a city like Memphis, a tangible sense of community can be foreign to some and impossible to find for others.

But in only a few square blocks, the Cooper-Young neighborhood continues to prove that home is where the art is.