Celebrated on the first Thursday of every month, Cooper Young Night Out lured Memphains out of their air-conditioned homes and onto the streets. The all-female band, Sibella, attracted small crowds througout the night to hear their mix of guitar and conga music.  Several sidewalk booths displayed local vendors artistic decorative pieces and jewelry.

Tsunami restaurant featured an “Iron Shaker” competition. The contest is a spin-off of the chef reality TV show “Iron Chef.” Two teams competed in a taste competition to guess what secret ingredients the bartenders mixed into their cocktails. Across the street, Sweetgrass Next Door  promoted Yazoo pint night. Just down Cooper, Young Avenue Deli hosted a Trivia Night; it was free to participate and top prize was $ 100.

The first Thursday of each month, it's Cooper-Young Night Out.  Shops stay open late, restaurants have specials and live music.  Store owners say this is always a big night for locals, families with children, and is typically, the biggest business night for a Thursday.

Cinco de Mayo and Sunny Skies: May 2011 Cooper-Young Night Out

The monthly Cooper-Young Night Out was ultra-festive this month, as the event fell on Cinco de Mayo.  Sunny, cool weather also brought out the crowds celebrating a rare stretch of dry skies. 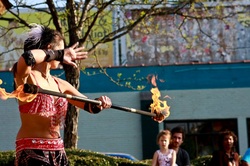