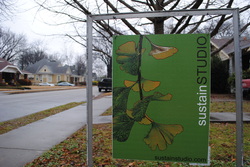 Josh Somes wants to make a difference in the world, but he’s focusing on Cooper- Young first.  He is responsible for Memphis’ first and only Energy Star remodeled home which will “perform twenty-seven percent better than a new home,” according to Somes.

Somes’ innovative renovation seems like commons sense, but it is a new and infrequently practiced idea to “apply sustainability to renovating houses,” he says.  It is his goal to inspire people to make green changes to their homes so that they can create a smaller carbon footprint and pay MLGW less.

Somes owns a few rental properties in Midtown.  While his wife, Deidre, works a full time job as an interior designer, Somes maintains their properties. He recently purchased a home in Cooper-Young with the intention of making it as energy-sustainable as possible.

On New Years Eve, Somes received news that his hard work has not been in vain; the restorations made to Project Ginkgo have earned third-party verification through Energy Star.  This means  that the efforts taken to make the home as energy efficient as possible have paid off.  The house received a HERs score of 73; in other words,  the house should perform 27% better than a new home that followed all energy codes.

Somes resolves to complete the project in Fall 2012 in time to celebrate the homes centennial.
Renovations
One of the most important components to renovating a home for increased sustainability is to improve the insulation of the walls, roof, and attic (referred to as the “envelope”). The Project Ginkgo house was in such poor condition that the plaster had to be removed from the walls in order to spray a layer of insulating foam, put in a layer of insulation, and cover it up with new dry wall. Here are pictures of the progress in his blog.

Additionally, Somes removed all three layers of shingles on the roof and replaced the roof with a radiant barrier sheathing.  This reflects the sun to prevent the attic from absorbing radiant heat as seen again in his blog.

It has been a priority of Somes’ to make these renovations without destroying the original character of the home, as to maintain its unique “Midtown look” such as:
The Big Picture

Somes  is aware that when people hear about changes made to improve energy efficiency, their first thought concerns saving money. He knows that many people want to know just how long they'll have to wait until their lowered energy bills pay off the added expense of green renovation. However, Somes wants to switch these priorities. He wants people to care more about their home’s impact on the environment before they concern themselves with the money they will save. Somes explains that a modern home serves its purpose if it provides both practical protection from the elements and comfort. Technology has allowed us to include many features to ensure our comfort, such as lighting, heating, air conditioning, indoor plumbing, and kitchen appliances. But the problem is that when the majority of modern homes use these features, they waste an alarming amount of energy (and consequently, money).

Somes wants to address this issue by linking comfort and feasibility through Project Ginkgo’s sustainability renovations.  He has taken advantage of smarter and more scrupulous technology as a better way to “build” the future.

Somes is uncertain about whether or not he will earn back the money he has put into the home, given today's poor housing market.  But recouping his investment is not Somes’ primary goal. He simply wanted to make renovations to the house so that it became an asset to the Cooper-Young neighborhood.  Project Ginkgo will be the test to see how he will renovate houses in the future.

Somes wants homeowners and builders to care about a building’s impact on the ecological system, whether it be your home, your neighbor’s home, or Kermit the Frog’s home on Not Easy Being Green Street; Somes hopes to  add to the conversation about homeowner thinking and builder practices to sustain and build greener homes.

Somes will hold a showcase in mid-February to talk to anyone interested in improving the energy-efficiency of their home.

If Project Ginkgo’s walls could talk...well, these walls couldn’t talk because this house has been completely gutted. But hypothetically, if they could talk, they might say, “It isn’t easy, but it is easier on the environment, being green.”