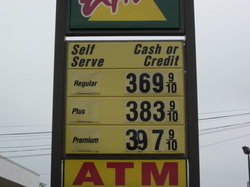 Picture taken at Mapco on Central/Cooper
Contrary to what you may think, consumers spent more at retail stores during the month of March while also paying more at the gas pump.

In a report released in April by the United States Department of Commerce, retail sales rose 0.4 percent during the month of March while sales at gasoline stations rose 2.6 percent.

When you exclude auto sales, which fell 1.7 percent, retail and food services sales were up 0.8 percent.

With all this information, MicroMemphis set out to find how sales faired during the past few months in the Cooper Young neighborhood.

"We had a few good shows on the weekend to bring in weekend revenue," said Phillip Stroud of Young Avenue Deli, "The weekends have been great since the weather picked up."

Stroud said the winter months of January and February are always tough but he says Cooper Young has been through this before.

"Compare it to what happened in 2008," said Stroud, "It is what it is, I don't think going out to eat will be affected but I do think it will affect vacations out of down because people will not go as far."

At the restaurant, SweetGrass, Adam Rember hasn't notice too much change in business opposed to how people travel.

"I've seen more people, if they are getting off work, coming in groups as opposed to car by car."

At Au Fond, owner Ben Vaughn believes the type of community Cooper Young is will help business to continue as it were.

"Gas prices don't affect our foot traffic or bike customers," said Vaughn, "It will affect the pocketbook of each household, but not the stores."

Phillip Stroud also commented on his mentality of spending and why he hasn't changed habits besides paying the most he ever has to fill up his vehicle.

"My wife and I view going out to eat as a luxury, we always have."