The Hattiloo Theatre is Moving to Overton Square 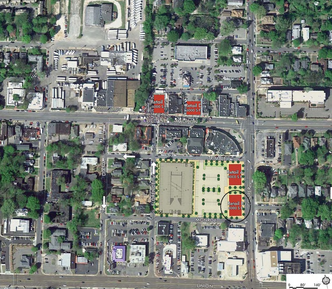 Location of Hattiloo in Overton Square: click to enlarge
October 13, 2011

In his blueprint for what will soon be the "theatre arts district" of Memphis, Loeb Properties and developers came up with a "Heart of Arts" plan that includes the relocation of the Hattiloo Theatre from 656 Marshall Avenue to the south side of Overton Square - on the corner of Cooper Street and Monroe Avenue. Hattiloo, which is a black repertory theatre company, will join Playhouse on the Square, TheatreWorks, and Circuit Playhouse. Outside of centralizing the theatre community, one of the goals for the move is to stimulate more business into the sqaure, said Loeb during his public meeting presentation at the Playhouse on the Square.

"We as a theatre are an economic  engine that drives the restaurant community," said Playhouse founder, Jackie Nichols. "Eighty-seven percent of the people that go to the theatre go out and have a drink or dinner before the show."

"The racial divide is there and what we want to do is bring our audience here to Overton Square...so that we can truly integrate this whole area," said Bandle.

What he sees for the future of Overton Square is "like Utopia." "That is really the society we want to see," Bandle said.

He also emphasized his intent to keep the same intimacy with his audience. He said he only thing changing is their location. Once the move is complete, the old building will become offices and rehearsal space.

"We have outgrown our space in just five years," said the founder.

The current venue houses 75 seats but the theatre's future residence could increase capacity to 200 over time.