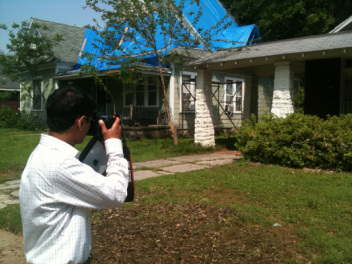 For real estate investor, Sardoru Umarov, the perfect location to invest his money is Cooper-Young.

"The feel of Cooper-Young, you just want to be here because of the atmosphere and the people," said Umarov.

Umarov started his business last year and has already completed four renovations and is currently building a residential new construction at 1841 Evelyn.

"Our houses are unique.  We don't just sale a house, we sell a lifestyle,"  said Umarov.

Umarov is among a select amount of investors who actively seek rehabilitation projects in Cooper-Young.

So far, he has only sold properties to owner-occupants.

Umarov said the Cooper-Young neighborhood is ideal for investors because of the close-knit community.

"I think the strength of neighborhoods is in the owner-occupants.  They are the people who are really invested in the nieghborhoods," said Joe Spake, a Realtor for Levid Realty.

Spake said investors who purchase to rehab and resell, "flippers", can improve the quality of neighborhoods on a micro level by raising the quality of individual properties and subtly pushing up values.

According to data obtained from the Memphis Area Association of Realtors, over the past year, the average home in Cooper-Young sold in 78 days.

Umarov said they try to include at least two bathrooms in their remodels.  He said their exteriors conform to the traditional Cooper-Young bungalow style found throughout the  area, while the interiors often feature an open modern layout.

He admits the Cooper-Young investor market can be competitive, but says they win buyers over with the quality of their kitchens and extensive landscaping.

Umarov said their latest home only stayed on the market for two days.  He believes their homes add value to the Cooper-Young real estate market.  Some Realtors agree

" We have seen this in areas of Cooper-Young and other parts of Midtown than once were considered marginal," said Joe Spake of Revid Realty.

Spake added that he hopes investors who purchase properties to rent will manage their properties well and keep the best interest of the culture of the neighborhood at heart.