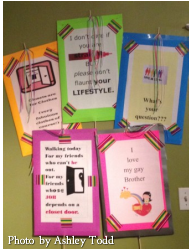 After a scare that forced them to turn people away for free HIV testing, the Memphis Gay and Lesbian Community Center is looking for independent funding to protect the service.

During the two-day suspension, many people were turned away from the clinic.
Will Batts the Executive Director of the clinic said he was devastated when he had to tell one young man the clinic could no longer provide testing at the moment.

“I received a call recently. I could tell he was young because he asked how old do you have to be to get HIV tested… I told him we are no longer able to test right now, but he could try the other clinics… He couldn’t go to those.You don’t know how it affects someone when they finally get the courage to call and get tested and I had to say no.”- Will Batts
A U.S. District judge granted an injunction on behalf of Planned Parenthood, so funding has been reinstated... at least temporarily.  But the director of the MGLCC says the free after-hours HIV testing is too important to be in limbo.

"We're the only place in the city that tests regularly after hours for HIV and Memphis still has a high percentage of people infected with HIV. "

Batts hopes the funding program will go into affect in the end of the 2012 year.

"I want to work on a long term plan instead of moving towards fundraising. "

"I understand people have strong faiths and religions, and I do not want to interfere with their beliefs, but it is important to know it wasn't just the gay community that comes to get tested.  It's the whole community."

Ashley Todd covers Lifestyles for MicroMemphis.
You can send her story ideas here.
Follow her on Twitter ( @_rontae )