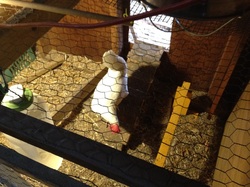 Urban chicken farmers have a lot to consider before purchasing their first chick.  Otis Tidwell, Manager of Code Enforcement for the city of Memphis, does not see urban chickens as a growing trend; however, Cooper-Young residents considering raising chickens should be aware of five local ordinances for keeping livestock.

Before purchasing chickens, suitable living arrangements should be prepared. City ordinances require water, shelter, ventilation and food sufficient for the animal’s health and safety. For each chicken, two square feet of indoor space, inside a coop, for instance, and ten square feet of outdoor space, referred to as “run space”, are recommended.

Run space is important for the health and well-being of chickens, and insufficient space may cause chickens to wander away from the backyard. The second ordinance emphasizes that animals should be kept clear of roads, alleys or lots in the city. This is a sanitation issue just as much as a safety issue: free-roaming livestock can leave refuse in their wake.

Chickens are ideal for small-scale farming, and Memphis city ordinance does not require a permit to keep them. Permits aren’t required for ducks, geese, turkeys and other fowl either; however, a permit is required to keep livestock such as cows, sheep, horses and goats. A permit may be granted by the health department, if keeping the animal won’t disturb the public health.

The final two ordinances for keeping chickens apply to all animals in the city limits. Chickens, like dogs or cats, are prohibited from making enough noise to disturb neighbors, and, to discourage vermin, food should be stored in rat-proof containers.

Tidwell, when asked about chicken noise or sanitation violations in Cooper-Young, said that he hasn’t taken any complaints.

Complaints called in to code enforcement by neighbors will be investigated by officers, and breaking an ordinance could result in a fine starting at $50.

One of the simplest ways to avoid a complaint is to have a conversation with neighbors to make sure that they are okay with chickens. Keeping an open dialogue could solve an easy problem and prevent a complaint from being filed.

The five ordinances are:

For more information on raising chickens in an urban setting, visit: