For its ninth annual international music festival, Goner Records invited more than 30 bands playing rock, punk and garage to play the weekend of September 27-30 at the Hi-Tone, the Buccaneer, Murphy's and the Cooper-Young gazebo.

From local bands to bands from all over the world, all these Goner label-recorded bands rocked together with the audience for a successful and joyful weekend. 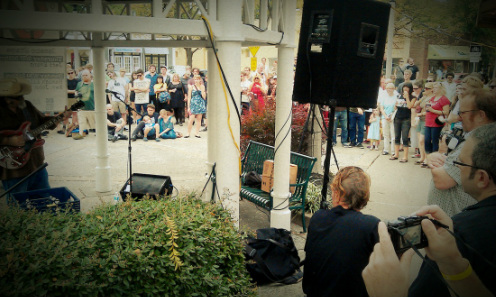 Opening ceremony at the Gazebo ( photo by Barbara Werner)
“It’s like a family reunion,” said Zac Ives, owner of Goner Records, who founded Gonerfest with his store's co-owner Eric Friedl.
Every year they try to change the lineup for the music festival and try to introduce new bands to the audience.

This year two new bands of the record label from Memphis played at the festival: Spits and Ex-Cult.
For the record label's owners, these new bands are most interesting to see performing, because it shows them how the people react to the new bands and whether they like them or not.

Having a good time is certainly one good reason why so many visitors are coming every year. “If you come once, you come again,” said visitor Brent Stratton from San Francisco. “It’s my second time here. I mostly like the garage music, the cheep beer and the cool people. Here, there are never cruel troublemaker people around.”
Next year will be the tenth anniversary of Gonerfest and the planning and band requests have already started. Ives said he doesn´t have anything special planned for the anniversary, but he plans to make it as big as it can be.