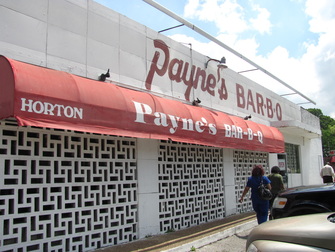 The moment you walk in the dimly lit building of Payne’s Bar-B-Q, you smell the aroma of slow-smoked, chopped pork shoulder smothered in sweet Memphis-based sauce, and at the counter you see the day-glow green of Mrs. Flora Payne’s famous coleslaw.

Payne’s has been smoking barbecue on Lamar Avenue just west of McLean for more than 40 years, and ownership has stayed in the family since it was opened by Horton Payne and his mother Emily in 1972.

“My mother (Flora Payne) and grandmother took over the business after my father tragically passed in 1984,” said Ron Payne, Flora’s son. “That same year, my mother was pregnant with my sister Candice.”

Over the years Flora has kept her promise to her husband for the place to remain the same. Payne’s has the same building, smoker, dazzlingly unique coleslaw, stove-simmered sauce and slow-smoked pork.

“Our mustard-based slaw and our sauce is what make us unique,” Ron said. “Our barbecue can be pulled or chopped depending on your preference. Our only addition to the menu in the past few years is just a jumbo-sized barbecue.”

Ron, who has been working at Payne’s for eight years, has been helping his mother around the business since he was a child. When he came home from school, he would help wipe down tables at the restaurant. His sister, Candice Payne Parker, works there, too.

Tuesday through Saturday you will see Flora, Ron, or Candice chopping smoked pork shoulder. You’ll always see a pot on the stove with the simmering “special” sauce, chopped pork with crispy bits topped with a scoop of mustard based coleslaw.

It’s extravagantly messy — and delicious, according to at least one nationally known food expert. Andrew Zimmern, the host of Bizarre Foods on the Travel Channel, voted Payne’s smoked bologna sandwich the best in the country.

“Although our smoked bologna gets recognition, the most popular items on the menu are the chopped barbecue sandwich and the smoked sausage,” Ron said. “We do have customers who come from all over the world who want to come to Memphis to get a taste of our barbecue.”

Flora said she plans to pass the business to her son and daughter. While she never wanted to change the business, she knows it’s inevitable in moving forward.

“We plan to add chicken and turkey to the menu,” Ron said. “We will make necessary renovations to the building and we hope to expand in the future.”

Parker said she is working with her brother Ron to get Payne’s Bar-B-Q more appreciation as being a part of the Cooper-Young community.

“We are within walking distance of Cooper-Young and most of our clientele is in the neighborhood,” Parker said. “We want to get more involved in the area.”

For many in Cooper-Young, though, Payne’s secret has been out for a long time.

“No matter what kind of day I’m having good or bad, when I step into Payne’s all I think about is the smoked sausage sandwich and its sauce dripping from the wrapper,” said Romeo Walker, who lives around the corner from Payne’s.

Gavin McGrath, who lives nearby on Walker Avenue, said he thinks Payne’s simplicity is unique.

“The food is incredible, produced using little more than a smoker, fryer, and a simple gas stove,” McGrath said. “Payne’s should get more recognition as being a part of Cooper-Young. Growing up as a Cooper- Young’un, I always appreciated the friendly neighborhood feel my family experienced. Payne’s may be Memphis’ best kept barbecue secret, but they’re no stranger to those of us who grew up in Cooper-Young.”