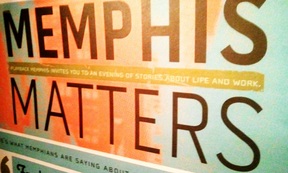 
In Memphis Matters no two performances are the same, the script is generated from the audience, and the stories are all real.

Memphis Matters is an open invitation from the company at Playback Memphis, an improvisational performance group based out of Cooper Young. At Playback Memphis, audience members tell stories from their lives, then watch as actors and musicians bring them to life, on the spot, without script, score, or rehearsal. The concept for Memphis Matters is the same, except the stories will be specifically about life and work in Memphis.

"It was born out of this idea that Memphis is a really intense place to live no matter your race, faith, background, or socio-economic status," said Virginia Murphy, Playback Memphis' Managing Director.


"We believe that gathering together and giving voice to all of the experiences of living and working in Memphis would help to collectively lift our civic spirits."

Murphy said not only do they want to use Memphis Matters as a tool to build and strengthen the community, but they would also like to see it become part of the core of Memphis.
Missed out...watch the video for clips from the show.