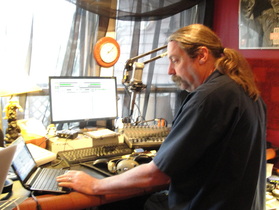 Who says you can't smoke, curse, and have an informal chat with your friends while you're on air? There are no rules at Radio Memphis, an Internet station.

Founder Ric Chetter wanted work for himself after years at commercial broadcasters. Fearing of a diminished love in radio, he left the airwaves.

Radio Memphis is right in the heart of Cooper-Young. It may be hard to find, but it is transmitting rock music all over the world. The station is located at the back of a house on Felix Ave. If someone looks beyond the heartedly decorated porch and vivid front yard, it is hidden behind a wooden fence.
The assessment of the current state of corporate radio is crushing. The broadcaster says that media conglomerates are run by accountants and lawyers who only care about making money and not about the actual radio program.

“You only hear the same songs played by pre-recorded DJ´s. Who wants that? We here at Radio Memphis are fighting what corporate greed has turned radio into nowadays.”

Despite his frustration, the business did not ruin his passion for radio.

Chetter, who has a long ponytail and wears rock´n´roll shirts and jeans,  is the on-air personality. His sonorous, deep voice makes you stop and want to listen forever. There is no hint of disillusionment about the true soul of radio when he talks.

Since its launch in late June 2011, Radio Memphis only plays local artists from Memphis and the Mid-South. Artists are welcome to send in their songs, in-person or e-mail.

“We only have three rules,” says Justin Jaggers, host of the Morning Show, “Don´t suck, no covers and we want studio-quality.”
To have the final word, Chetter feels that radio is about to have a reality check. “Internet radio like we are doing here at Radio Memphis will be the death of terrestrial radio as we know it,” he said.