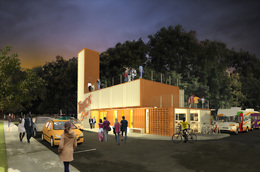 Residents of the Cooper-Young and Central Gardens neighborhoods have conflicting opinions about how the Truck Stop, a new food venue at 2120 Central Ave., will affect the area.

While residents of Cooper-Young say they support the project, residents in Central Gardens say it will cause problems with traffic and parking.

Taylor Berger, a former lawyer turned businessman, is opening a food venue where food trucks can set up shop in a central location. It will have electricity, water and other amenities that the trucks can not get other places.

Central Gardens, which is listed on the National Register of Historic Places, is just a few blocks from Cooper-Young and the future location of the food venue.

Central Gardens residents sent a letter to Berger earlier this year identifying their concerns about the project.

Central Gardens Association President Susan Jabbour, said Central Gardens residents did not support the Truck Stop project due to the amount of traffic it would bring to the area around Central Avenue and South Cooper Street.

“The board did not support the decision to build there because that intersection would be even more congested,”Jabbour said. “Plus, customers would be parking in residential areas and walking to the restaurant, and we just don't think neighbors would like that.”

Berger also owns YoLo at 6 S. Cooper St. and Chiwawa at 2059 Madison Ave., in the Overton Square area of Midtown, along with the Tamp and Tap located at 122 Gayoso Ave., in downtown Memphis. He also started the Food Truck Association in Memphis.

“The idea of (the Truck Stop) is to make the restaurant out of shipping containers. It’s innovative and symbolic to the train tracks running next to the location,” Berger said. “It goes along with quirky architecture of the Cooper-Young area. They gave us a letter of support to continue with our plans.”

Cooper Young Community Association Executive Director Kristan Huntley said the Cooper-Young Neighborhood is a different kind of neighborhood inside the city of Memphis. The neighbhorhood is free of big chain stores and fast food restaurants. She said her group gave Berger support because he conducted neighborhood meetings to hear the residents concerns, and the venue is one that appeals to the people in the area.

“We didn’t necessarily give him a letter of support, but we supported the idea of the restaurant,” Huntley said. “He held two public meetings to explain what they are planning, and that was not required. So, we were on board after that.”

“I think it will make money. It should bring in people from all over the city,” Berger said. “Other businesses should definitely benefit from this.”

Berger said his goal is to start construction as soon as some underground gasoline storeage tanks are removed, and that will take between two and six months.

Jabbour said there are city ordinances and development codes that have to be met as well.

“There are still ordinances that have to be met such as dealing with the billboard that is in that lot,”Jabbour said. “The plans for the restaurant are to be built out of metal, which conflicts with the Midtown overlay of metal.”