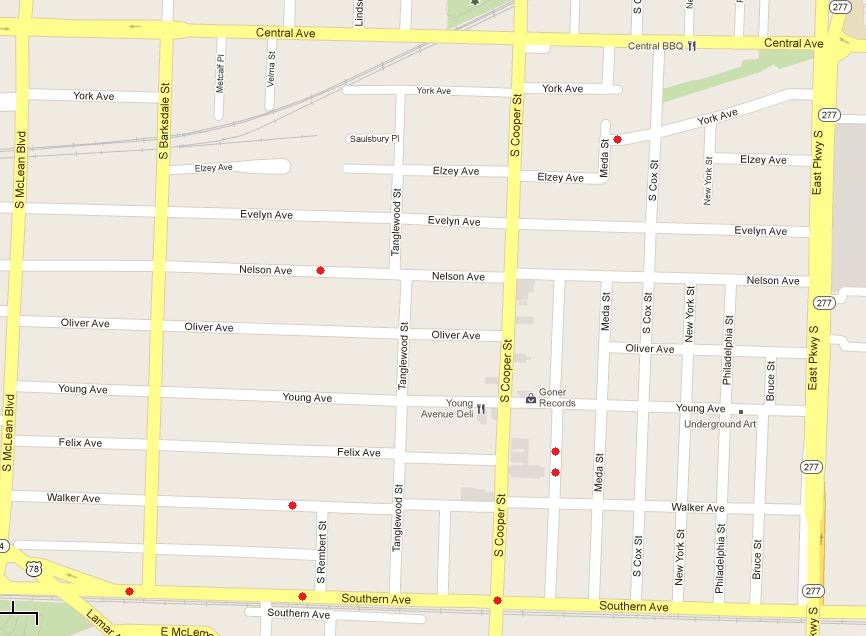 The red dots on the map indicate where the burglaries took place. All locations are rounded to the nearest 100 block to protect the privacy of the victims. (Map courtesy of Google Maps)

A string of burglaries hit Cooper-Young during the month of September, eclipsing the amount reported during that same month last year.

The year-to-date totals for burglaries also increased, with 45 reported from January 1 to September 30 in 2012 versus 34 reported during the same period in 2011.

Sgt. Karen Rudolph, public information officer for the MPD, said officers are paying close attention to the thefts and are reacting accordingly.

"According to the Colonel over at Union Station, we are maintaining highly visible patrols, including bike patrols when staffing allows," she said. "We have also directed the officers to process every scene if it's feasible."

The Union Station Precinct is responsible for policing the Cooper-Young neighborhoods in addition to other Midtown areas.

Sarah Frierson, a member of the Cooper-Young Community Association safety committee, said that with the help of neighbors, burglaries can be brought to a minimum.

"In the moment, a burglary at your home is more likely to be thwarted by one of your neighbors than by your own actions, because more often than not, you won't be there," she said.

She said the committee serves as both a watchdog for the community and a liaison with the MPD.

"The Cooper-Young Safety Committee strives to promote a safer neighborhood by educating our residents on matters of safety and well-being and increasing awareness of safety concerns," she said. "When necessary, the committee can also serve as an advocate with local law enforcement officials."

Frierson urged residents to keep an eye out for any suspicious activity and report it to the police if something doesn't feel right.

"Cooper-Young residents are great at being proactive and taking care of one another," she said.

She said the most important thing a resident needs to do when burglarized is to actually report the crime to the police.

"It's amazing how many people still don't file police reports," she said. "The police cannot combat crime if they don't know about it."