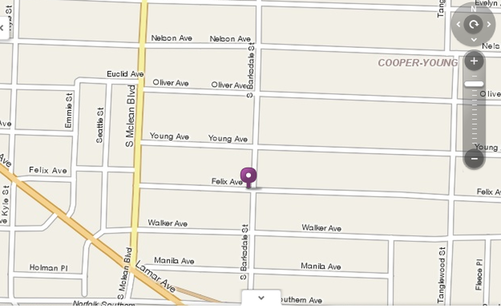 Cooper-Young resident, Terry Place walked down Felix Avenue this afternoon with no idea about what had taken place on this street Wednesday.

"What do you mean? This is a safe neighborhood. Are you sure?"

WMC-TV first reported an incident that happened late Wednesday, involving a woman entering her home near Felix and Barksdale.

A man approached her front porch and wanted her purse.  The woman refused. That's when he shot.


She went to the hospital in non-critical condition.  But the fact that the injuries were not life threatening didn't relieve the unease some neighbors felt.

Place said, "this is so shocking. You hear of robberies and other incidents, but this really hits home for me."
The day immediately after the crime, The Cooper-Young Community Association sent an email alert out about the shooting.  But by Friday night, Place wasn't the only resident unaware of what had happened on Felix.

Both Perry Massenburg and Allison Brick had the same reaction.

"I didn't hear about this," said Massenburg, "I try to keep up with the news, but if they reported it soon after it happened and haven't followed-up it's easy for it to get lost."

WMC-TV was the only news outlet in Memphis that reported the story on Thursday.  On Friday, The Commercial Appeal followed with more details and an interview with the victim, a 24-year old opera singer.

After finding out about what had happened, both Massenburg and Brick shook their heads, saying they hoped this would be a lesson to others in the neighborhood.  Brick said, "It's so terrible. The only thing I can hope for is that people are more aware of their surrounding."

Massenburg agreed, "We have to be aware. We know who belongs in here and who doesn't. This is a safe neighborhood and we need to keep it that way."
This marks the third armed robbery that has taken place on a three-block stretch of Felix in the past 2 1/2 years.

It was more than a year ago, July 2010, that a couple on an evening walk was robbed at gunpoint on the opposite end of Felix at Cooper.  No one was hurt in that incident.

In May 2009, a woman and her mother were robbed as they walked home one evening. The daughter was hit with the gun. That incident took place near Felix and Tanglewood.

MicroMemphis attempted to get more information about the assailant - who is still at large - from the Memphis Police Department.  The Union Avenue Precinct would not give us information and referred us to the Public Information Officer.

The P.I.O promised to email with more information but failed to send anything.  By 5:00 p.m. Friday afternoon, an automated system said the office we had called earlier in the day, was unavailable.

The Commercial Appeal obtained a description of the assailant during their interview with the victim.

Description, according to the victim:
Black male, 6-foot-2, 150 lbs wearing a black hoodie and dark pants.  This description has not been released by MPD.

Reporting Crime
If you have any information that could help solve this crime please call Crime Stoppers at 528-CASH.
If you ever see suspicious activity in the neighbor please call Neighborhood Watch at 545- COPS.