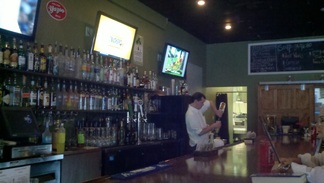 Sweet grass next door is a sports enthusiasts' heaven.
By Adam Douglas/MicroMemphis Reporter

If you're looking for great country cuisine at a great price, a bar to watch the big game on six 42-inch television screens, with one projector screen also, or just to enjoy your favorite beverage, then look no further than Sweet Grass Next Door.

Next door is the sister bar/restaurant of the original, Sweet Grass, LLC. Owners say that they decided to open Next Door because they wanted a place for people to go and hang out and watch sports.

"We're getting there, we want this place to be somewhere where the neighborhood can come and grab a drink and watch the game in a nice environment," head chef Ryan Trimm said.

In addition to this being a place for sports enthusiasts to hang, Next Door is quickly becoming a spot for residents to go during the Cooper-Young Festival this year.

"This year we're preparing for a big crowd," Trimm said. "Sweet Grass won't be open, but Next Door will. And we will have a special menu and drinks that we'll have for the patrons during that time."

The specialty dishes for the festival include hot wings, burgers,oysters on a half shell, boiled shrimp and crab cakes, just to name a few. These go well with the drink specials like three dollar  New Castle cans, one dollar off draft beer and other mix drink specials.

Trimm says he expects a major crowd this year  during the three-day event. But unlike last year where parking was a hassle, Trimm has an alternate plan in effect this time around.

"Last year we had an opening to get to the back parking lot, but now there's a fence put up," Trimm said. "But this year, we will have the inside of the restaurant open, as well as our patio seating outside and other things like that as well."

Trimm would like to see more people come during football season to catch their favorite college and pro teams on Saturdays and Sundays to cheer them on.

"I don't think people know that we show sports here," Trimm said. "Saturday we will have college football on all day starting at 11 a.m. and on Sunday there will be plenty of NFL games on as well."