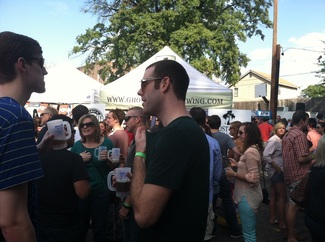 Let there be beer! A warm fall day in October marked the third beer festival held in the Cooper-Young area with patrons (both local and from out of town) arriving promptly to show their enthusiasm for top-quality brews.

The festivities officially kicked off around 1 p.m. on the southeast corner of Walker and Fleece, but a line of eager beer fans could be seen forming outside the gate about a half-hour beforehand.

Once inside, after receiving the proper wristband and plastic mug (somewhat making one feel like a certified taste-tester), each visitor had total freedom to travel to any of the 14 tents to try their brews as they pleased with no pressure whatsoever.
The grounds of the festival were spacious with room to stand or sit comfortably with friends in-between samplings. The air was filled with the sound of Memphis music spun by Goner Records,  the bustle of the crowd, and the smell of home-grilled bratwurst.

Trevor Robinson, a 24-year-old attendee who lives in the Cooper-Young neighborhood, said this was his second visit  for that very reason. “It’s just a great place to kick back and enjoy yourself.”

His friend from East Memphis, Matt Barrett, was experiencing the festival for the first time and, quite enthusiastically, recommended a few of his favorite samples.

“I love home brews, and the fact that there are names I’ve never heard of before – like Country Boy – is freakin’ fantastic! High Cotton is local, but I had never tried their stuff before. Pretty much everything I’ve tried today, I’m trying for the first time. You’ve gotta try 'Nacho Bait' by Country Boy! It’s sort of sweet with a spicy aftertaste.”

Andy Ashby, one of the men behind the curtain and a former employee of the Flying Saucer bar downtown, said the Cooper-Young Beerfest has a simple philosophy: “Small lines, long pours, and drink leisurely.” The main attraction and the intention of Ashby and the rest of those involved in the festival’s creation is to provide a venue for people to try a variety of beers at their own pace with enough time to savor each drink.

When asked about the origins of the event, he said, “Well, the simplest way to put it is that we really just wanted a place to drink beer with our friends. A buddy of mine from Seattle had been backpacking through Europe and he attended a few beer festivals during his travels there. After meeting up and hearing stories, we wanted Memphis to have a 'beer lover’s fest' similar to the ones he saw overseas.

"Cooper-Young is the perfect neighborhood for it to be held in: The residents are lively, diverse, nonjudgmental, and open to trying new things.”

Creating a festival for beer lovers is exactly what Ashby and his counterparts have accomplished. A representative for each brewery is required to be present at each tent to answer any questions people may have about the product. “These aren’t just random employees getting paid to pull levers and fill your mug. They proudly represent what they’re serving and just love beer. There’s a genuine passion for what they do.”

There was, however, a moment of panic when several of the brewers started to run out of beer. Thinking quickly, Ashby and staff made an emergency beer run to buy two kegs of Ghost River and  $200 worth of Blackstone and Red Brick to make sure they had beer until the end. "We're going to work to make sure we don't run low on beer in 2013. We haven't had our wrap-up meeting yet, but I would imagine we'd keep our strategy simple. We'd probably add more breweries and freeze or decrease the attendance level."

While they are still paying off various bills, Ashby says he estimates that they will have made more than $17,000 for the Cooper-Young Community Association.

Keep up with Beerfest news at beerfest.cooperyoung.org.