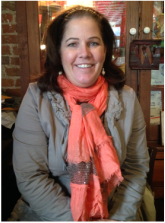 Dana Whitehead is the owner of Toad Hall Antiques and Gifts store, which is located at 2129 Central Ave. She is originally from Charlotte, NC but came to Memphis initially for a job in the hotel business. Shortly after moving to Memphis she decided to open her store in 2003. Since she’s been in the Cooper- Young neighborhood it has been great and she loves the city and the people. The last day the store will be open is the same day the store was established, Feb. 28, 2003. It will be a good-bye anniversary to the neighborhood and all her loyal customers.

How did you get the name of your store?

The name came from one of my favorite children’s books, Wind in the Willows. Toad Hall was one of the places in the book so I used that name.

What made you want to open an antique store?

I used to shop in Memphis Antique Market which is on Central street and was interested in the store so I got to know the owner, who was selling the store, and she led me into the business. I bought her business and kept the name until I moved on Cooper. I was there for three years.

I have been located here for 11 years since 2003. I love this neighborhood. There is nothing better. The residents and restaurants are great. Cooper-Young is a one stop shop kind of neighborhood. People can eat, shop, and play. Eat, Shop, Play!

Was business good since you’ve been open?

Business has been great. We’ve just finished one of the best Christmas seasons we’ve had in years.

What was the best part of having your own store and living in Memphis?

The best was the people I’ve met. I believe I have the best costumers. They have been coming is the store telling me how much they will miss the store. One lady wanted me to meet her daughter before I left because I helped her pick out a baby name. I didn’t even know the lady but it was nice. The connections I’ve made and the people I’ve met was the best part. This is a bitter-sweet moment. I love Memphis, the food and the people.

Why are you moving?

My husband and I were talking about moving but we didn’t expect it to be so soon. It just so happened that a local developer made me an offer that was too good to pass up. So I decided to move.

Where are you moving to?

My mother who lives in North Carolina has a sister in Florida and I’ve been thinking about moving to Florida. We will all move to Gulf Breeze, FL. We just didn’t think it will happen this soon.

Will you be opening a store in Florida?

Yes. I will. The items we don’t sell before the store closes we will take them with us to open a new Toad Hall Antiques and Gifts store. Since many of my Memphis costumers travel and vacation in Florida it will be nice to see them.