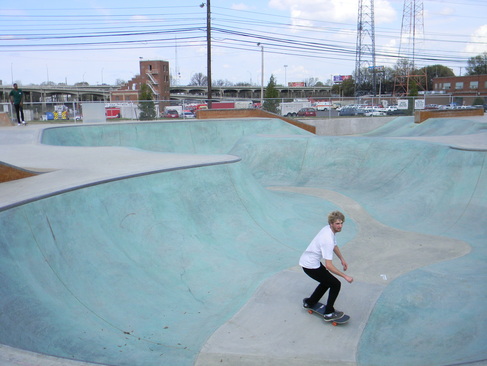 For the skaters in Memphis, the wait for a new home is over.

“Jungle Jeff,” an avid skateboarder for 35 years, is ecstatic about the new park.

“We waited five years for them to build this for us. The city has done a great job on it. I can’t believe we got it done so fast.”

Wormhoudt, Inc., is behind the design of the skate park. The company is based in Santa Cruz, Calif., and has been designing since 1964. According to their website, “Wormhoudt Incorporated's community based approach to skate and bike park developments has produced award-winning projects around the world. Our projects represent people and the environments they recreate in; from private backyard pools to multiple acre regional public parks, every project tells a story.”

Travis Stewart, who comes to the park “religiously,” said, “This is an advancement from the other skate park we had,” in reference to the older skate park located in Germantown.

Skaters come from all over the city of Memphis to the Tobey Park skate park.

Collierville resident, Connor Bran, comes to the park almost every day after school with a group of friends. He began skating seven years ago.

“Everyone starts skateboarding for two reasons. Either they got bored with an organized sport or they didn’t believe in there’s no ‘I’ in team, but there sure as hell is a ‘me’ in there. So it’s definitely an individual sport. ”

Jasmine Hunter covers Recreation for Micromemphis.
You can send her story ideas here.
Follow her on Twitter ( @Jasmine_Hunter  ).