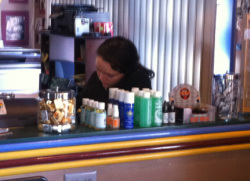 Underground Art is a neighborhood tattoo shop in the Cooper-Young area that was opened by two C-Y natives Angela and David Russell, but before talking about her own shop, I asked Angela about the recent story of Babak Tabatabai.


A nearby Midtown Memphis neighborhood association made the news when tattoo artist Tabatabai leased a building in the Broad Avenue area. After tens-of-thousands in renovations, he was informed that he could not open his tattoo shop in the burgeoning Midtown art district.

Russell said "I do consider tattooing an art form. The thing happening with Babak's studio is more about gentrification than a dispute about art. "

But in the Cooper-Young area, Underground Art has built its name as one of the most established artist enclaves in the neighborhood.  The shop is approaching its 20th year in the Cooper Young area.


Sarah Forbess pierces body parts and answers phones.  She's a piercer and receptionist at Underground, who joined the group in August of 2011.

“I called Angela every day, and finally she called me and said she needed a piercer. I packed my suitcase and was here within hours ready to work," says Forbess

She said a business that is fun can be hard to find.

"Upcoming tattoo artists have to go through an apprenticeship that is similar to a 4-year college schedule, but can sometimes take longer to accomplish," said Forbess

“The small tattoos are starters, you may tattoo a heart and then later you do the banner. It is like you are building up to a portrait,” Forbess says.

It's a creative business that requires patience and cleanness also requires care.

“I’ve turned people away who are not sure if they want their piercing,” says Forbess.

“We try to make people feel at eased because this sometimes can be a scary experience, but tattoos and piercings are permanent and they require commitment," says owner Angela Russell.

However, kindness is not the reason Underground Art is a unique business. Underground was the first tattooing business that started as custom art. Custom art is tattooing that is drawn free-style by the artist.

The popularity for tattoos is often driven by popular culture.  When Underground Art first opened, Russell remembers that many customers wanted to look like George Clooney.

“It was the movie From Dusk Till Dawn; everyone wanted the tribal tattooing design Clooney had covered over his body,” says Russell.

Today, it's same story, different movie.  Now Russell says many customers want the dragon tattoo from the movie The Girl with the Dragon Tattoo.

The artists at Underground Art have found that although body piercings and tattoos are a form of self-expression, they are often   influenced by television and music.

Ashley Todd covers Lifestyles for MicroMemphis.
You can send her story ideas here.
Follow her on Twitter ( @_rontae )