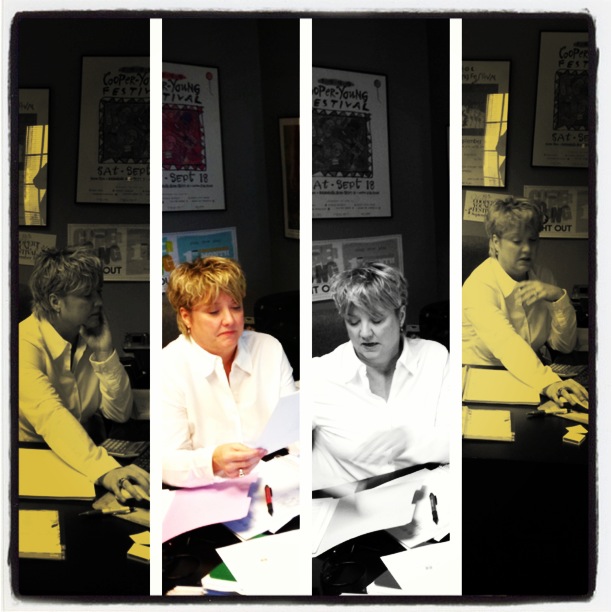 March is Women’s History Month, a time for recognizing women and all that they have accomplished over the years. We would like to celebrate three phenomenal women and the legacy that they are sure to leave behind in Cooper-Young. Two have seen the community grow over the years, and the other is planning to relocate to the Cooper-Young area permanently.  Singer-songwriter Nancy Apple, clothing retailer June Taylor, and Cooper-Young Business Association director Tamara Cook, all have contributed to the C-Y area in their own special way.
On a Thursday evening Cooper-Young was buzzing with locals as a diverse Memphis crowd entered and exited Young Avenue Deli. Across the street the woman who had a hand in helping bring Cooper-Young back to life can be found typing away at her computer and the only thing to get her attention at the moment is when she is asked to give a rundown of her week.

“It’s hard to say what my days are like because they are all different,” said Tamara Cook, who has been the director of Cooper Young Business Association for more than a decade.

Cook has proven time and time again that she is here to stay in Cooper-Young.

“When I think about C-Y, I see different people trying to make something turn around to good,” she said. “This is a place where everybody can be themselves, and I don’t think a lot of people judge people around here.”

Cook first came to C-Y in 1999 and her office was located where the Gay and Lesbian Community Center is currently housed. “They hired me and then they said, ‘Come on we will show you your office. We walked in … there was a small room and I went ‘This is it, huh?”

She couldn’t know at the time that she would see the area go from three restaurants and a nearly non-existent retail presence with one gift shop to more than 20 restaurants, more than a dozen retail stores, and the largest free festival in the Mid-South.

As executive director, Cook works to attract retailers to Cooper-Young and fill vacant commercial space. She also is the go-to person for the annual Cooper-Young Festival, which she said takes up most of her time throughout the year.

When it comes to all things C-Y, Cook does it all, said Dana McBride, board president of the Cooper-Young Business Association and owner of Toad Hall Antiques.

“She is a key asset not only to our neighborhood but also to the business association,” McBride said. “She’s our go-to person. If it weren’t for her my job would be a lot harder. I adore Tamara.”

After a few successful years with CYBA, Cook left the job and opened a pizza restaurant in the neighborhood. But she missed the key component in what makes C-Y tick.

“In 2007 right after the festival they called me and said ‘Hey we need you to come back to Cooper-Young.’”  Her only request was that she needed a full-time position so that she could take care of her two boys.

When she came back she recalled membership in the CYBA being at a dismal 14 businesses, which she quickly increased to 80.

“Last year I topped out at a 102 in membership, which is really good,” Cook said. McBride called that number “fantastic.”

“This is my life,” Cook said. “It turns into your life. People want you to come to their openings, art shows, meetings at lunch or night. It’s who I am, it’s what I do. I talk about Cooper-Young all the time.”

She choked back tears when asked if she could give any advice to young women.

“I believe everybody is given a life … and what you do with that life is entirely up to you it just depends on how much you want to work at it.”