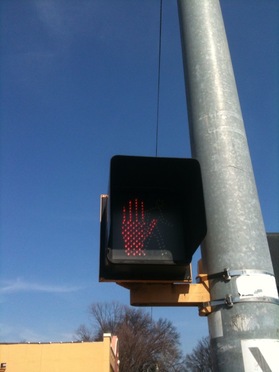 The walkability of Cooper-Young depends on many pieces moving at once. On the national website, WalkScore, the neighborhood scored an overall 88 out of possible 100 points.

That ranking has remained consistent. In 2010, Livable Memphis cited Cooper-Young as one of the best examples of a walkable neighborhood in the Mid-South.

According to WalkScore - that translates to "Very Walkable."  Compare that to other neighborhoods like Cordova (WalkScore 26,) Germantown (WalkScore 27,) and Collierville (WalkScore, 20.) Translation - these neighborhoods  are car-dependent.

The average WalkScore among the largest cities in Tenneesee - a paltry 30.

The manager of a local restaurant says that despite a rash of violent crime that hit Cooper-Young at the end of 2011, he still feels safe walking in the neighborhood.

“Crime happens everywhere, it's down 11 percent in 2011,” says Phillip Stroud, general manager of the Young Avenue Deli, “but I wouldn’t say that I would be afraid to walk around here at night you know.”

“Downtown there are three robberies every two hours,” says Stroud.

With as many amenities Cooper-Young offers, Stroud was asked if the neighborhood was missing anything.

“There is a lady that lives nearby that doesn’t particularly like the fact that the business is booming, you know live music, fifteen different restaurants,” says Stroud.

Some people in the neighborhood feel it is progressing too fast for it's own benefit. With the growing number of cars on the street and more and more restaurants opening, traffic is a major factor in the safety of walking from one place to another. A solution to this problem is the valet service in front of many of the restaurants.

“I don’t think the customers know what they are doing, you know when they pay the valet $10 to do something they could have done themselves," says Stroud.

Stroud says that many of the guests to Cooper-Young feel confused when the see their valet park along the street and while the parking crisis is booming along with the neighborhoods popularity, most say the construction of a parking garage is inevitable.

Ken and Erica Whitehead live one street away with their two children, and for them there are some barriers to true walkability in Cooper- Young.

“A lot of the sidewalks are pretty broken up, as far as the safety I feel safe. Cooper and Cox I feel safe on, but I have two kids and sometimes I have to veer into the streets because of how broken up the sidewalks can be,” says Erica, wrestling with her son to get him dressed.

Their home is a two-story with wooden exterior that makes you think about the warmness of your grandmother’s home.  Pictures litter the walls in their foyer  of friends and family, a piano rests to the right and the stray cat outside walks itself straight through their front door.

“I work with some people in the business where the Beauty Shop is now. We moved here before there was a neighborhood," says Ken.

“People drive too fast up and down,” says Erica popping her head out of the childrens first bedroom and then quickly returning.

But traffic and sidewalks aside, the Whiteheads love the easy walk to place to eat.

“You can step out of my door and have how many choices of restaurants in literally two minutes,” says Ken.

Read how cleaning up streets and more police presence reduced crime in Holland.

Tracey Harlow covers Recreation for MicroMemphis.
You can send her story ideas here.
You can follow her on twitter ( @harlow_tracey )