C-Y residents discuss ways to fight back against crime 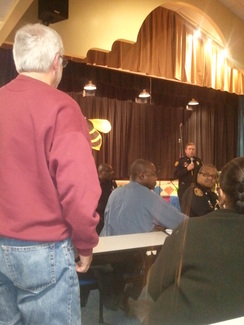 Cooper-Young resident, Apryl Childs-Potter, says that Cooper-Young is a safe place to live; a great community full of people that care for one another.

This despite the fact that her home on Blythe Street was broken into two weeks before Thanksgiving.

“I was at home by myself when the burglar kicked in my front door,” said Childs.

Startled by the noise, she went to go check and found a stranger in her home.

“My dog started barking and that scared him away.”

Childs then called the Memphis Police Department and gave them a description of the suspect. On November 14th the MPD called Childs in to look at a line-up of suspects. Just four hours after she identified the suspect as Courtney Chambers, he was arrested for aggravated burglary.

“I was very surprised when it happened because you don’t think about something like that happening to you and then when it does you’re taken aback,” said Childs.

Crimes like the break-in that happened to Childes have slowly increased in the Cooper-Young community since October. One of the most shocking was an armed robbery on Felix Avenue that left a 24-year old Cooper-Young resident in non-critical condition. More recently was the residential burglary that left Cooper-Young resident, Beth Lee, without Sofi, her 7-year old 25 pound beagle.

The recent and unexpected rise in break-ins, burglaries, and violent crime in the past several weeks has left many Cooper-Young residents wondering what they can do to stay safe. Last night, the community was able to address their safety problems to Memphis Mayor AC Wharton and his administrative staff, as well as the Memphis Police Department and code enforcement officers during a safety meeting at Peabody Elementary.

Mayor AC Wharton started the meeting by talking about his current plans with the MPD that will place more security cameras in Memphis neighborhoods like Cooper-Young.

Colonel Russell Houston, head of the Union Station, took the floor next answering questions and listening to suggestions that concerned community members. He told Cooper-Young residents that he wished he could put squad cars that run every eight minutes near everyone’s house, but since the MPD does not have the resources for that, that’s where the community comes in.

“Help me, help you,” said Col. Houston, after telling the residents that reducing crime requires citizen participation. “Please pay attention on behalf of your neighbors and if you see something suspicious, report it.”

CYCA receives grant to combat overgrown alleyways, by Ashli Blow/MicroMemphis reporter (Photo by Ashli Blow)
Mayor Wharton continued to ask for neighborhood members to be active as he talked about his current lawsuits against blighted property owners.

"Folks are hiding out in these houses, stashing stolen stuff and I have no sympathy for the absentee landlord," said Mayor Wharton. He continued, "We have a number of laws on these blighted vacant properties...so please get in touch with your state representative and state senator and support the bills we have."

Near the end of the meeting, the Mayor announced that as a Midtown Memphis resident himself, he wants to do sweeps of vacant lots and get rid of the escape routes in the area. He also announced that there will be a new police station serving the Cooper-Young community on East and Crump Street.

"I'm hoping that after this meeting people will get to know the MPD better and have a connection with the community association, as well," said Childs. "Most of these crimes have patterns and they are not random acts but really organized crime. They may not all be preventable," continued Childs, "but if we work together we can eliminate some of it."

"To prevent crime before it starts get involved and report suspicious activity," said Col. Houston.

A Memphis 311 service, said Mayor Wharton, will begin this spring to help eradicate erroneous phone calls made to 911.

For more information on the Cooper-Young Community Association call 901-272-2922. 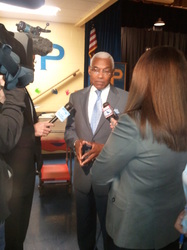 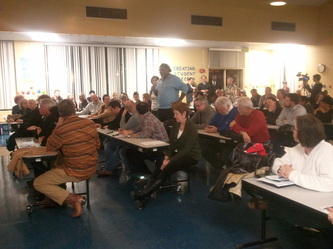 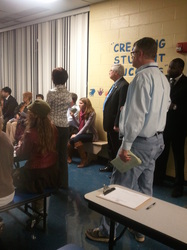 How to stay alive during a robbery, Memphis Police Department

Below is our Storify of Tweets sent out during the Cooper-Young Safety meeting.

Safety Alert from Cooper-Young Community Association
This safety alert was issued December 8, 2011 and as of the second week of December, is still in effect:

The Memphis Police Department is asking Cooper-Young residents to be on the lookout for a vehicle and 2-3 males who are suspects in the recent rash of break-ins in the neighborhood.  They are described as:

The suspects have been pulling into driveways during daytime hours for the break-in, so please be attentive to any unusual cars parked at neighbor's homes during the day. The suspects' SUV is one of their most distinguishing characteristics and has been consistent in all the incidents.

We ask that all residents please keep an extra watchful eye out.  The police are on patrol, but the more eyes on the street watching for suspicious activity the better.

If you see someone or an unusual vehicle matching this description, please contact the Memphis Police Department immediately at 545-2677 or 911 if a possible break-in is taking place.

Get on The Cooper-Young Community Association Email List so you will always know the latest neighborhood news.