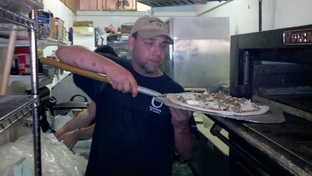 Duncan Aiken serves up a fresh newly made pizza.
By Adam Douglas/MicroMemphis Reporter

If you've thought that they were getting rid of Lou's Pizza Pies -- then you were wrong. Well, maybe you might have slightly been right. But what's going on at 2158 Young is that Lou's Pizza Pies will soon be called Skunx Chef Pub -- a nickname that was given to new operating manager Duncan Aiken, formerly of Overton Park Pizza Stone.

"Lou's Pizza Pies been around a long time," Aiken said. "It just needed a change. The reputation of this place was very inconsistent -- the inconsistencies needed to go away."

Some of those aforementioned inconsistencies included people not knowing when Lou's was opened or closed, it sometimes occupied a bar seating area and the inside of the restaurant didn't have a particular pattern or look to it. So Aiken wants to be consistency in everything -- from the bar to the floor. Everything has to be in order.

"What we're doing is making sure that the people that work in kitchens in the restaurants in the area have somewhere to go," Aiken said. "There's no late night pizza joint in town. So I'm going to try to keep this place open until midnight -- and on a consistent basis, we will be open until 10 p.m. seven days a week."

Aiken seems to be a very meticulous manager. He seems to have a keen eye on details, and how he wants the new place to operate. But everything comes in moderation. So when you call the restaurant, Aiken and his staff will answer Lou's Pizza, but  don't look for Skunx's namesake to be officially open for business until late December -- at the earliest. Until then, Lou's will remain open as such and business will be as usual.

"There have been challenges everyday," Aiken said. "But I'm willing to do whatever it takes. I think we will be at full strength and have everything looking the way I want it to be around the end of December or sometime in January at the latest."

Though the place will have a new name, Aiken promises to keep a lot of the menu the same. Aiken says that the recipe and most of the things customers have come to love about Lou's dishes will be the same. But Aiken plans on putting his own spin to the pizzas and paninis. The only changes may be with liquor. Lou's only served beer. But Aiken hopes that in the future, Skunx will serve wine.

"The menu is the menu," Aiken said. "The menu is pizzas paninis and salads. "But I will have a breakfast and brunch menu as well. I can cook anything out of the oven. And I want to serve wine because that's how you get the ladies to come."