by Lindsey Lowry/MicroMemphis reporter
Updated August 9, 2011
In early August, Bardog Tavern owner, Aldo Martino, opened a restaurant at the intersection of Cooper and Peabody. Slider Inn, a restaurant and bar is located at 2117 Peabody.

“When I first opened Bardog, I anticipated opening another restaurant eventually down the line, but I didn’t think it’d be this soon. It hasn’t even been three years.”

“The name ‘Slider Inn’ comes from the sliders we serve. Plus it’s a take on a baseball term, ‘slide into home base.’”

Slider Inn has six beers on tap, a few bottled beers, a red and white house wine, and select liquors.

Bar food, baseball, and beer. How American. What is also American is the fact that few people have had a generous disposable income since the recession. DeMatino says, “At this hard economic time we try to be affordable for everybody. Everybody will be able to eat at the Slider Inn. Everything will be under 10 dollars except for our lobster roll which will be $12.99.”

Slider Inn primarily serves sliders. “Since we do sliders at Bardog, and I thought we could capitalize on doing a little bar with solid food at Slider Inn.  The menu is a little simpler than Bardog and I think we can do that with the slider concept. We will serve different kinds of sliders- chicken, pork, and beef. There will be a little more variety.”

He has already anticipated the needs of the numerous vegetarians in Cooper Young; “We’re going to have a really great veggie burger. That will not be in slider-form- that will be a full-size burger. We’re playing with a few different recipes right now using molasses and black beans, sprouts, and cinnamon,” says DeMartino.

DeMartino is an owner who concerns himself with the details of Slider Inn, such as the menu.  “I collaborate with the head chef there, Jessie Kenn. I’ve been friends with him for a few years. We met through the restaurant industry.”

When asked why he chose to open his establishment in Cooper Young, DeMartino said, “We’re just trying to make a little nice neighborhood place over there. I’ve always liked that property. I think we can make a nice go of it.”

After renovations on the building, formally Bluff Bayou, the restaurant will now hold 130 people: 50 inside, 50 on the front patio outside, and 30 on the side patio. The side deck will be rented for parties and might have live music. DeMartino says, “We’re going to take advantage of that nice deck out there and have deck parties on Saturdays and Sundays.”

Slider Inn hours are as follows:


“We want to concentrate on an easy going atmosphere.  If we do any business we want to involve the neighborhood. We want to have fun while at the same time providing a good community center, ” says DeMartino.

Tiny Eats at the Slider Inn 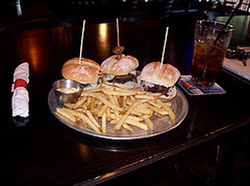 Checking out the new Slider Inn in Cooper-Young?

Then check out our review and informational article
about one of the newest eateries in the neighborhood.

Read articles about the Slider Inn in other Memphis media... and about Cooper-Young's new 'blue plate' restaurant, also opening in August.