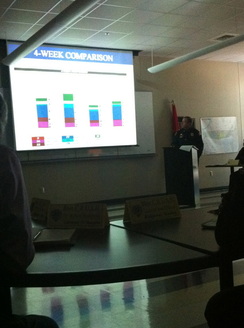 Since his promotion, Colonel Houston has been faced with several cases, the most serious incidents being two armed robberies. At the time this story was written there have been no arrests made in either case, but Colonel Houston said reporting suspicious activity and watching out for yourself and your neighbors is the best way to keep crime down.

Helping with the transition, retired Colonel Billy Garrett remains involved in Midtown and keeps a strong relationship with the Cooper-Young community.

Garrett said, "I remember attending one of their first neighborhood watch meetings in the early 1990's. I represented the MPD and Community Policing at this meeting, as I had been selected to be the first Cooper-Young substation commander."

At that time, the precinct was located at the corner of Cooper and Young, where the Bank of America stands today. Garrett remembers his first impression of Cooper-Young and the drive the people had to protect their community.

"Members of this community had already formed their Community Development Corporation... they were doing all the right things to turn around their neighborhood," Garrett said. "Providing security for this neighborhood was challenging, but rewarding. The city wanted this area to prosper. We all wanted to see it be successful and grow."

One of the biggest challenges at that time, and still today, is finding a way for officers to navigate the narrow, neighborhood streets. With lots of residents and businesses blooming, the problem with street parking and pedestrian traffic increased. To help this issue, Garrett brought back the bike patrol program and added more foot patrol.

Garrett said, “Residents are very good at reporting criminal activity. The quality of life is very important to a city that wants to grow itself. The area is organized, with groups such as the Cooper Young Neighborhood Association and the Cooper Young Business Association.”

He knows it is easier to reduce crimes when you have an active, involved community.

“When a community is organized, the police can get the safety message out quickly. I used these groups to announce significant arrest information and any new initiatives that I began or the police department started.”

Now that Colonel Houston is over the Union Station, he says he is ready to be connect to the Midtown area and form open lines of communication with the residents.

“I plan to make myself and my staff available to meet with residents for ideas and improvements. Keeping open communications goes a long way towards letting our residents know that we as a department are responding to their needs.”

Houston plans to continue having extra officers around the Cooper-Young area on the weekends and during special events and also utilize the bike officers.

“I encourage people to keep us informed about anything that they may be suspicious about, or if they just have questions about possible criminal activity in their neighborhoods. We’re here to help.”